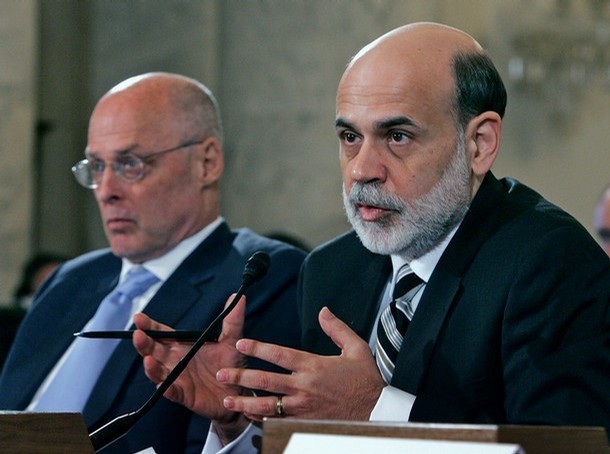 So far, it looks like the House listened to dismayed taxpayers, and isn’t allowing the Treasury’s $700 billion bailout plan to pass without quite a bit of scrutiny.

For a summary of Paulson’s and Congress’ bailout plans, see this AP article.

Asserting that the plan would allow Mr. Paulson to act with “absolute impunity,” Senator (Christopher J.) Dodd said, “After reading this proposal, I can only conclude that it is not only our economy that is at risk, Mr. Secretary, but our Constitution, as well.”

Democrats and Republicans are eager to include legislation that would protect mortgage holders, cut the salaries of executives at Wall Street firms and prevent a breakdown of the financial system.

The back-and-forth came as the Bush administration and Congressional leaders moved closer to some kind of agreement on an historic $700 billion bailout, including tight oversight of the program and new efforts to help homeowners at risk of foreclosure.

But Congress and the administration remained at odds over the demands of some lawmakers, including limits on the pay of top executives, and new authority to allow bankruptcy judges to reduce mortgage payments for borrowers facing foreclosure.

Other hot points of the debate:

Who’s being punished most during this crisis?
According to the NYT, it’s retirees, or those close to retirement, whose 401Ks have shrunk dramatically.

Paulson shouldn’t be given the controls in resolving the crisis. He’s barely the man for the job in the first place.
President Bush wants to give Henry Paulson unbridled power in resolving the crisis, but as Dean Baker puts it in the NYT, “(the) guy totally missed this (coming), and has been wrong about almost everything. It’s almost amazing they can do this with a straight face. There is clearly skepticism and anger at the idea that we’d give this money to these guys, no questions asked.”

Taxpayers should get stock in the banks that are being bailed out.
The government would then sell those stocks at a profit, allowing taxpayers to recoup some of their losses. This approach worked in Sweden, during its 1990s financial crisis.

The people responsible for this mess should be punished.
Quite a few Wall Street brokers and government officials walked away with their multimillion dollar bonuses, vacation homes, children’s prep-school educations, and Porsche Cayman S sports cars intact. While taxpayers will be responsible for more than $2,000 per head for this bailout, former finance execs will be able to keep their own small fortunes protected, according to Paulson’s plan. People are saying they should be held financially liable for their mistakes.

The Bush Administration and Congress agree on one thing: This plan has to be passed quickly.

If you have thoughts on this, I suggest pummeling a powerful lobby near and dear to your heart (the AARP, for example) with your opinion. Alternatively, leave comments on major media sites, such as CNN Money, so that reporters ask the right questions. As a last resort, send your local representative’s office critter some concerned emails. Even if you just end up as a numbered opinion in a data pool, the big folks on the hill need to hear more from the people at the bottom.

As a last last resort, vent on blogs. But before you do, make sure your opinion has been heard by someone who knows someone making high-up decisions about this mess.

After all, we’re not only paying decisionmakers’ salaries, pensions, and healthcare plans. We’re bailing out the entire country.