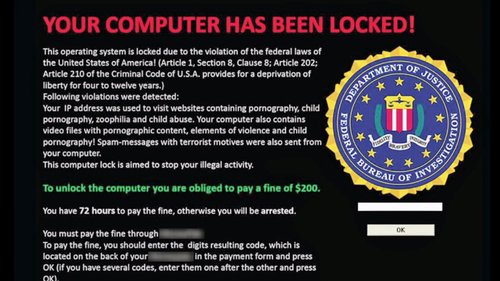 Ransomeware is a type of malware that restricts access to the system it infects, extorting payment in exchange for the removal of the virus. The infection either encrypts files on the hard drive, disallowing access until payment is made, or locks the entire system, offering display messages meant to push the owner to payment. Reveton, one of the first major ransomware worms, surfaced in 2012 and was known as a “police trojan” for the virus’ ruse that the system had been locked by a police organization. The virus notified users that their system had been used for illegal activities like using pirated software or downloading child pornography and then asked users to pay a fine using a voucher from a prepaid cash service like Paysafecard. The system’s IP address would often be displayed–and sometimes a live feed from the device’s camera–so as to give the illusion that the person was being watched. This shows the psychological aspect that is often required for successful hacks.

SEE ALSO:
The Best Credit Cards on the Market
Prev2 of 11Next