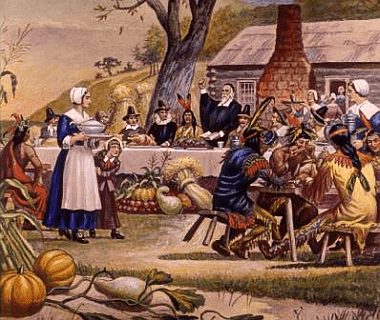 Thanksgiving in America is a combination package. On the one hand, dragging oneself through endless security lines and traffic jams to visit relatives with dubious entertainment value does not count as one of life’s most pleasurable activities.

On the other hand, the activities embedded in the holiday–giving thanks, gratitude, reunion, and kingly feasting–are like a day spa for the soul. If done with right intent, Thanksgiving’s gratitude launches celebrants into a delightful state of peaceful reflection that carries the holiday season.

I confess that I’ve never succeeded with the latter. Thanksgiving to me has always been a combination of habit and obligation. Cook bird. Gather with family. Eat until stomach resembles a large pumpkin. Nap. Give private thanks that nothing dramatic happened this year. Wake up the next day with a personal manifesto to only gain 5 pounds this holiday season. Repeat once a year.

Gratitude Means Relief
The fragmented and infected plot that launched the holiday never concerned me. Anglo-Saxons who may or may not have feasted with the Native Americans they fought and eventually sequestered into areas that would later sprout casinos which sucked up Anglo money seemed so archaic compared to the opportunity to take two days off to feast and laze.

I can’t imagine that this is what the originators had in mind when they first built their feast in the 17th century. The day was originally intended as a mass, or thanks to God. As in, thank God we made it through this alive. Or, thank God half of us didn’t die during last week’s massacre. Thank God this food is here and we’re not all living off gruel and twigs. Their revelry had an undertone of genuine relief, a foundation for gratitude.

Gratitude Means We’re Lucky
Two times in my life I’ve experienced genuine gratitude on Thanksgiving. The first occurred while I was living in Ghana, where everyone subsists off of fufu (pounded cassava root with spicy soup), banku (fermented pounded cassava root with spicy soup), and egg sandwiches. Compared to that monotony, a Thanksgiving feast among fellow Americans was a privilege and relief. African life had worn me thin enough to make Thanksgiving a vaunted occasion.

The second time in my life that I feel genuine gratitude is now. Having closely followed the economic crisis from its unfolding in June, I see nothing short of a series of miracles taking place.

For the entire year, the press has been screaming that things are VERY BAD and ABOUT TO GET WORSE. No retirements, no homes, no healthcare, no money. Read enough news, and you start to believe that nothing can redeem our situation. Time to buy a cabana hut in Veracruz and hide while entropy dismantles the whole shebang.

In light of this VERY BAD news, I observe Thanksgiving taking place with NO bad news. There’s no turkey shortage. No salmonella outbreaks. Gas is cheap. Big screen TVs are a dime a dozen. Heck, you’d think we were back in the good ol’ days of 2006.

The miracle doesn’t stop there.
Consider this:

-Food prices have risen exorbitantly during the past year. Nonetheless, we are putting a feast on the table, with enough for days of leftovers.

-Home foreclosures have become commonplace. Yet we’re still able to gather around a table in a home to enjoy our food.

-Credit is hard to come by these days. At the same time, many of us have enough money—or credit—to buy food on Thanksgiving, allowing us to enjoy ourselves despite the precarious situation.

-Gas was $4/gallon earlier this year. It came down enough to allow us to drive or fly to relatives’ homes for the feast without suffering intermittent panic attacks.

-Many people have been laid off. But there’s still enough money for a $50 turkey.

We’re still lucky. Despite difficult circumstances, the Thanksgiving celebration isn’t bankrupting anyone. It’s a reprieve from the economic maelstrom that has been pounding our collective psyche like a poltergeist. It’s people time, not system time. It’s food, not food prices. It’s water, not drought.

Thanksgiving is good news this year. For that, I truly am thankful.