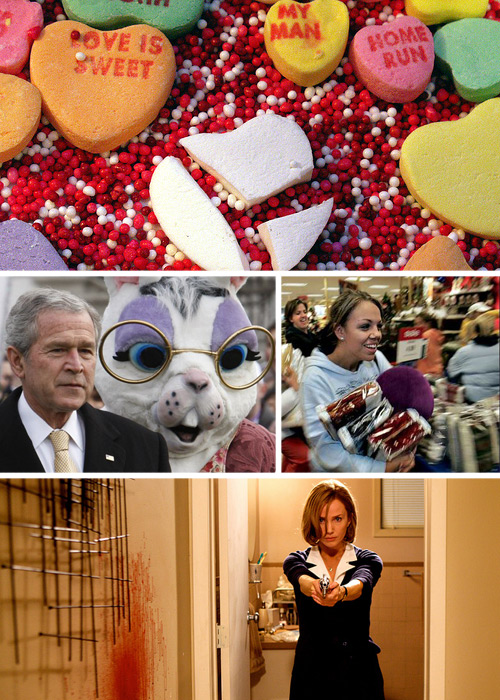 There is nothing more American than spending the money that could support a Congolese family for a year on a bunch of crap that we don’t need.  Like those candy hearts for Valentines Day, you know the ones that taste like a mix of bone meal and shattered dreams?  Nothing says America like spending money on something no one wants, needs or (dear God) consumes all in the name of a holiday almost completely manufactured by corporations.  But it makes us feel good, and especially in these trying economic times, its nice to remind ourselves that the electric bill can go to hell, we’re going to buy some pine-tree branches and expensive electronics!  This is America, dammit!  And when we spend on Holidays, holy hell do we spend big. 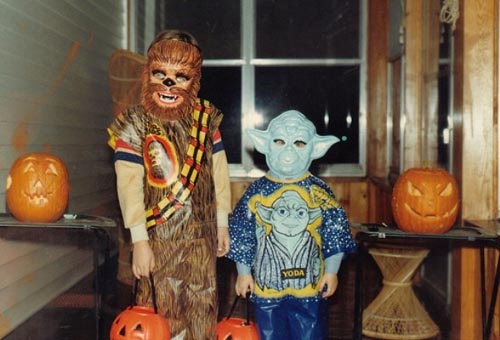 Coming in at number five in the list of most spendiferous holidays, Halloween clocks in spending close to $5 billion.  That’s roughly $50-$60 dollars spent for every person that actually celebrates the holiday (people of other cultures and that particularly fun-killing brand of Christians excluded.  While that number is rather large, keep in mind that it does not include the copious amounts of booze, which would likely catapult this holiday to the top of the list.

So that’s $5 billion on sexy nurse costumes, sexy pirate costumes, and sexy proctologist costumes. Not to mention the candy.  To put it into perspective, that $5 billion number is actually higher than all corporate donations to foreign aid organizations for the entire year.  Halloween should get a pass for being a towering monstrosity of consumerism, owing to its unique status as one of the few holidays everyone enjoys. 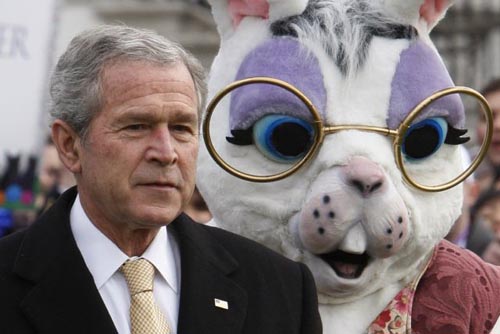 Easter was yet another childhood excuse to eat so much candy it made us sick.  The Easter egg hunt is a particularly venerable piece of America, meriting its own section on the White House website.  So when you’re talking about what basically amounts to Halloween minus the costumes, it shouldn’t be any larger than $5 billion, right?  Well, no, try more like $14 billion.  While the majority of this is spent on food and those really disappointing egg-dyeing kits, a huge portion of this spending is on clothing.  And not just clothes for Easter…Mass?  Apparently, a chunk of that big ole $14 billion number comes from the fact that, come Easter, women take the opportunity to refresh their wardrobes for the spring.  While it’s unclear if this is directly related to Easter or just a general trend, being Americans, I’m going with the “An excuse to shop and spend money!? HOLY CHRIST!” 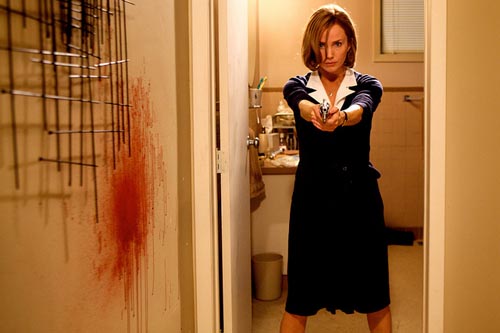 To prevent a Mothers vs. Fathers debate, let’s just group together the two holidays that have the highest ratio of how often you remember them to how much regret you feel.  Despite their somewhat sullied reputations as holidays invented to sell more Hallmark cards that contain some version of “I’m sorry you’re so disappointed in me”, celebration of mothers and fathers is actually an old tradition dating back to Greek and Roman times.

The modern incarnation started sometime around the turn of the century, with Mother’s day being declared a holiday by congress in 1914, and fathers day in 1966.  Combined, Americans spend somewhere in the neighborhood of $27 billion, with people loving their mothers about $5 billion more than they do their fathers.  This comes out to roughly $240 a person every year, a number that has jumped in recent years due to the slight economic recovery and the speculative rise in the costs of finger paints, construction paper and pipe cleaners. 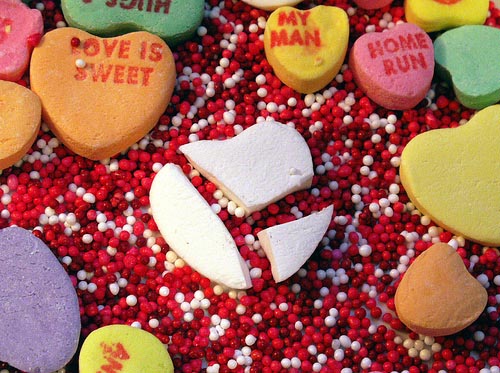 Short of Christmas, Valentine’s day is the biggest spending holiday of year for Americans.  For 2011, the number was expected to come out slightly ahead of Mother’s day, topping $15 billion.  And that’s not even counting the money spent on expensive dates, or the bottles of bourbon you use to drown your crushing, crushing loneliness.  And while a box of chocolates and some flowers might set you back $50, the average per-person expenditure actually comes out to the mid-hundreds.  Where’s that extra money coming from? Ask those of us who can barely afford a disgustingly cute Build-A-Bear (look it’s wearing a sailor’s uniform! It’s not supposed to be doing that, it’s a bear!).

Well the numbers for Valentine’s Day are skewed majorly upward by people buying jewelry so expensive if any sensible person received it they’d murder their significant other (guys can get jewelry too, right? How else am I going to finish my pejazzle set?) 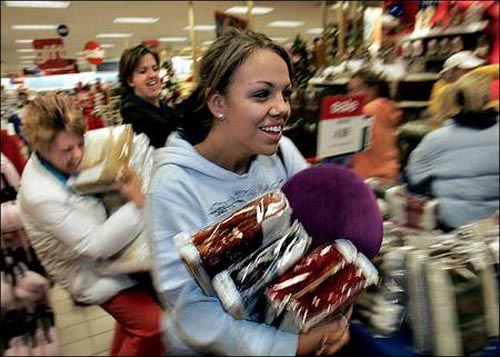 Contrary to popular belief, Black Friday wasn’t the largest shopping day in America until 2005.  But thanks to relentless media boredom and ruthless retailer price-cutting, it has become the largest, even spawning a bunch of really annoying titles for concurrent days, including “Sofa Sunday” and “Cyber Monday” (despite the fact that no one under 35 has used the word “cyber” since 1994).  This year, Black Friday broke all records, with 226 million shoppers crowding the halls and trampling one another in pursuit of Tickle Me Elmo…or…whatever kids are interested in these days.

That 226 million is more than three-quarters of every man, woman and child in America.  Meaning that basically anyone who is physically capable of walking and knocking over fellow moms like a linebacker went shopping a few weeks ago.  They spent almost $400 each and collectively spent upward of $50 billion.  That means one day easily dwarfs the expenditures of virtually every other major holiday throughout the year.  And that’s just for Black Friday alone.  The total Christmas season sees that number roughly double.  So next time you hear depressing economic news, remind yourself that—in a sort of modern-day Gift of the Magi — Americans are still finding ways to acquire even more credit card debt in order to buy expensive crap they don’t really need for their loved ones.