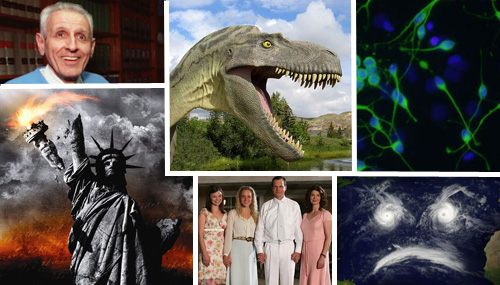 Science and Religion… here are two things that do not go together like birds of a feather, or peas in a pod, or pork chops in applesauce.  But the two have to live together one way or another seeing as the world is technologically and scientifically developing at nearly the speed of light while the Light of Christ still illuminates the Bible Belt and beyond with the same intensity as ever.  The two world views are bound to clash on most of the issues, but perhaps there is some common ground somewhere.  Or maybe not.  Here are some of the ways Christians try to resist the proven facts of science. 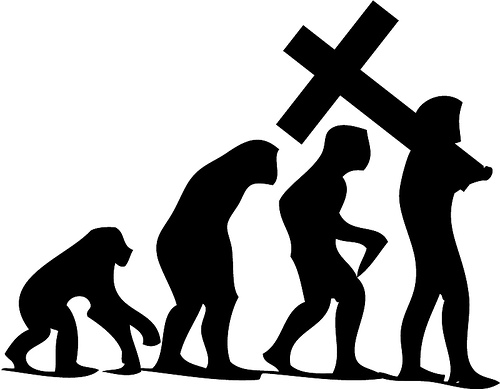 One way in which Christian apologists try most fervently to undermine the progress of scientific knowledge is in the field of evolution.  After all, the theory of evolution is as central to our scientific understanding of the world as the Creation story is to Christian life today.  According to the Bible, the world was created in six days, God resting on the seventh.  Imagine God as an old man in a basement assembling a model train kit.  Animals and plants and people were set down meticulously in their finalized forms.

Biologists have a different take.  According to their wacky theory, life actually began in a heap of sludge as simple cell units developed and slowly evolved towards complexity, developing characteristics which would serve the organisms in their specific environments. To further combat this, Christians came up with the backwards idea of Intelligent Design, in which God actually made flowers look sexy to bees and so on.

Quite frankly both of these scenarios are somewhat hard to wrap the mind around but don’t forget that Evolution is backed up by countless experiments and fossil records.  Creationism is backed up by… Creationists.  They may not have the hard evidence but boy do they have volume. 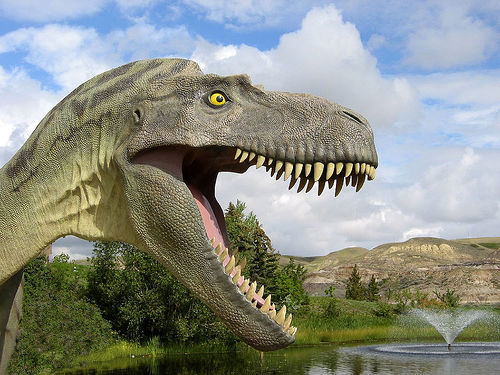 If we’re going to talk evolution then we have to mention dinosaurs.  We have their bones and we’ve spent a lot of time assembling them for the benefit of countless field trips to the Natural History Museum.  Who were these beasts and what role do they play in human history?

Paleontologists like Ross Geller from “Friends” will tell you that dinosaurs are an extinct species that roamed our planet hundreds of millions of years ago.  Christian fundamentalists don’t much care for this theory, or for that slick, Godless Ross character espousing it.  After all, it really throws a stick in the spokes of that Creation in a week idea.

That’s why the fundies came up with what some like to call the Flintstone theory.  They argue that dinosaurs were placed on this earth, fully formed, along with the other animals God created, but then they died for some reason.  At the Creation Museum in Kentucky one can see, in full Flintstones style, dinosaurs and humans hanging around the ancient world together and having a dandy time of it.

Others have gone for a more far-fetched explanation, reporting that dinosaur bones are props that God made and buried in the ground to test human faith.  Pretty sneaky, Lord!

Age of the World 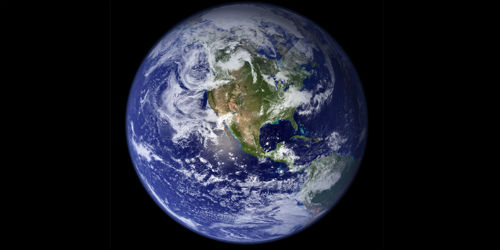 The age of the world is 4.5 billion years old according to the leading scientific minds.  We suspect this age based on radiometric age dating of lunar and meteorite materials found on our planet and beyond.  Sure there’s no timer glued onto the North Pole so we can’t be 100% sure, but we have a theory with some solid foundations.  The Christians have their theory as well, but the foundations are a little more shaky.

If we look at the Bible as a historical document, this world of ours is practically a newborn.  Creation is generally estimated by these “scholars” to be about 20,000 years in progress and the Earth itself at about 6,000.

The humongous discrepancy in these ages (4.5 billion and 6,000) makes sense.  The parts fit together.  Evolution, a long and complex process, needs some time to happen.  Creationism only needs a moment, the rest of those 6,000 years being spent hanging out with pterodactyls, building pyramids, writing boring letters to the Corinthians and so on. 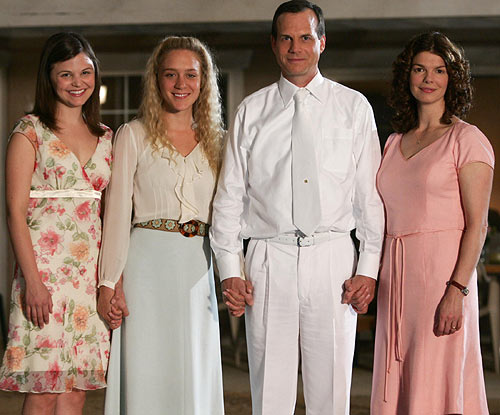 Christians hate sex.  No, that’s an oversimplification.  They love sex, one has to assume, but you’ve got to play by the rules of monogamy.  To many of us modern-minded folk today, marriage is an archaic social structure used to promote family and societal welfare.  To Christians, marriage is an ontological fact, a natural behavior for human beings.  To deviate from it means that not only are you failing ethically, but you are perverting a natural order.

Science tells a different story.  Even if we avow marriage as a society, the data shows that it’s probably not all too natural for us.  Some animals mate for life… but usually not very smart ones.  Flightless birds with pea-sized brains are known to mate for life, but primates prefer to get around.

Bonobo monkeys, for example, have sex with just about every other Bonobo they ever meet.  They engage in recreational sex, stress-release stress, conflict-resolution sex, oral sex and, um, solo-sex. Also, the Bible is a made-up, man-written fiction. 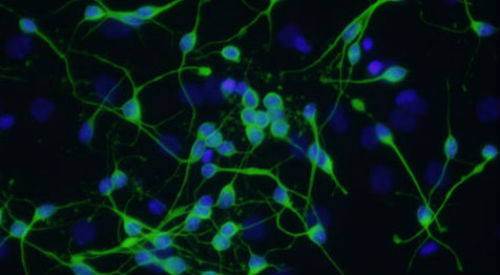 Stem Cells, pardon the religious parlance, are something of a real life miracle.  To define them broadly, Stem Cells are the seeds that have the potential to become a myriad other kinds of specialized cells.  They can take the form of almost any other kind of cell and thus present a unique medical and scientific opportunity.  The stem cells can be used to cure diseases such as diabetes, cardiac diseases, certain cancers and more.

Why would anyone in their right mind, let alone Jesus, oppose such a miracle treatment?  Because it represents the ultimate hubris of course!  Also because these stem cells have in the past been harvested from discarded, unwanted fetuses.  It’s easy to understand how this would make a few people uncomfortable, especially the Bible thumpers, who have begun to claim that fetuses will not only be killed but harvested in the name of stem cells. 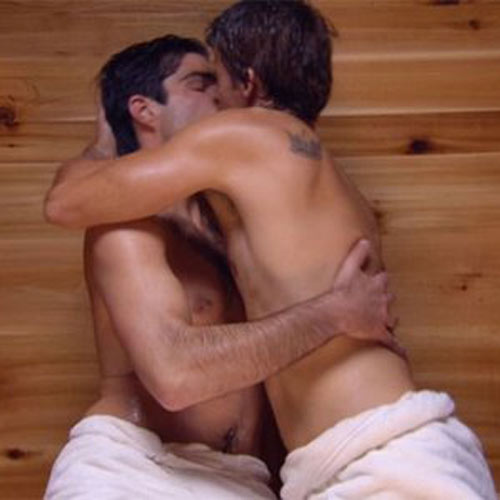 Homosexuality, Biblically speaking, might be a sin.  But is it really so bad?  Yes, God commands mankind to not have sex with people of the same sex, but if you read that section carefully it also says no shrimp, no multi-fabric blends in our clothing, and no cheeseburgers.  Despite this Christians don’t generally avoid shellfish, blended garments or McDonald’s.  Yet the gay thing, they’ve latched on to.

Science tells us that sexual orientation is not a choice.  While the cause of sexual orientation is unclear, what is clear is that it’s set in stone from a pretty early age and can’t really be changed with drugs, therapy or prayer.
Still, Christians are quick to point out that homosexuality represents a ‘corruption of nature’ and a moral failing to boot.  The result has been that religious organizations funnel millions and millions of dollars to causes that systematically rob gays and lesbians of their rights.  Meanwhile, the shrimp purveyors go unpunished! 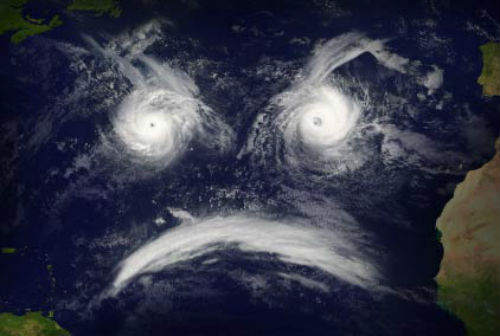 Christian Fundamentalists, while preaching brotherhood and love, can have a surprising amount of bloodlust.  After any natural disaster, religious figures are quick to blame the event on some moral failing of the people most direly affected.

This, most likely, comes from the story of Noah and his arc.  God causes a flood to punish the world for its sins.  At the end of the story, however, God mentions that he will never pull some shit like that again.  Also, after its pointed out by Abraham, God admits that destroying whole cities over the sins of a few residents is just not ok.  This comes from the story of Sodom and Gomorrah.

Still, Hurricane Irene was blamed on New York’s new gay marriage legislation.  Katrina was also blamed on the gays.  Apparently gay people are the cause of all major weather catastrophes.

End of the World 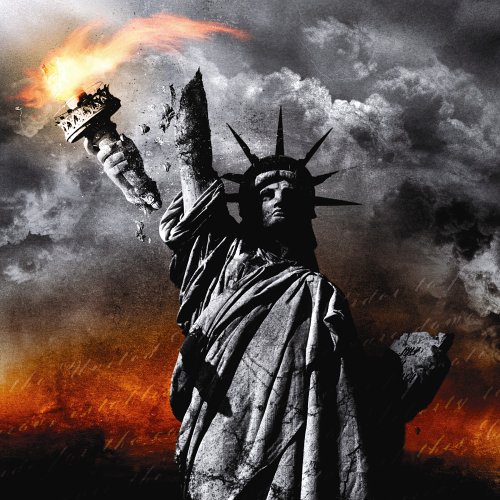 If there is one thing that religious people and members of the scientific community agree on, it’s the apocalypse.  Listen to a fundamentalist preacher on the subject and then listen to Al Gore and you’ll find some startling similarities.  The end is near.  The end will be hot and full of earthquakes and volcanic eruptions.

But the messages are not identical.  While Al Gore bases his theories on research and tries to impart on people that we can change our ways and avoid this disaster, religious people have no such hope.  Many of them look forward hungrily to the end of the world.  Since the beginning of Christianity there have been nuts on the street claiming that the apocalypse is near.

This is probably because the apocalypse and the subsequent judgment will at last provide Christian fundamentalists with an affirmation that their beliefs are correct.  Accordingly they look forward to the day with drooling mouths, evidenced by the popularity of the Evangelist novel series “Left Behind,” about the rapture and the torments of the poor sinners who are… left behind.  It’s been made into a video game filled with hellfire and violence, and it is approved by priests around the country.

The Right to Die 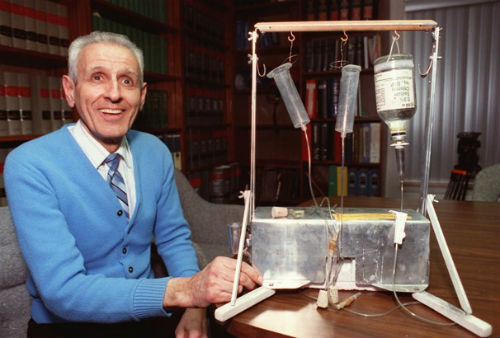 One arena in which the religion vs science debate rages regards the right to death. Time after time the media is filled with stories of individuals on life support, completely brain-dead but, with the aid of machinery, still breathing and living… technically.

Often times the loved ones of these individuals want to pull the plug, reasoning that they need closure and that there is no longer anything of their loved one left inside the braindead body.  But religious fanatics oppose this with astonishing anger and resentment.

After all, to pull the plug is to play God, right?  Well, maybe… but maybe the whole life support machine system is playing God — without the help of the machine, these people would surely have died much sooner.  And why is it so bad to play God anyways?  What would Jesus Do, after all?