It’s true, not all of the older business executives understand the value of using Twitter. The micro-blogging tool is placing a human face on corporations that otherwise wouldn’t be able to directly communicate with their stakeholders. The Fortune 50 is an exclusive club of the top companies in the United States with a minimum entry point of $48 billion in revenue. I would hope these companies are taking full advantage of social media as their reach is massive.

This feature is to highlight the Twitter marketing lessons we can draw from America’s 50 largest companies. Let’s start by crowning the winners. With the follower count metric the top five includes: Dell, Best Buy, Target, Microsoft and Pepsi. Apple could be included in this list because they are using several different accounts that sum to millions of followers.

Now let’s crown the losers. Believe it or not, there are actually 10 companies in the Fortune 50 that are not using Twitter at all. The industry is usually energy or banking. For example, JP Morgan Chase whom ranks #13 with $115 billion in revenue has no account despite having $400 million invested in Twitter. It’s fair to assume they are laughing their way to the bank so hard they need not worry about Tweeting with the peasants.

The follower count metric isn’t everything. Recently I wrote a Social Media Marketing Ideas feature and I want to expand the idea of using Twitter as a tool within a big business.

@HomeDepot is one my favorites as they are fully taking advantage of the human angle. They are always Tweeting customers directly and making conversation. Occasionally they will feature an article on the topic of home improvement. The hardware store has a daily Do-it-Yourselfer feature that gives the spotlight to one of their customers. The store truly shines in making their consumers feel special. 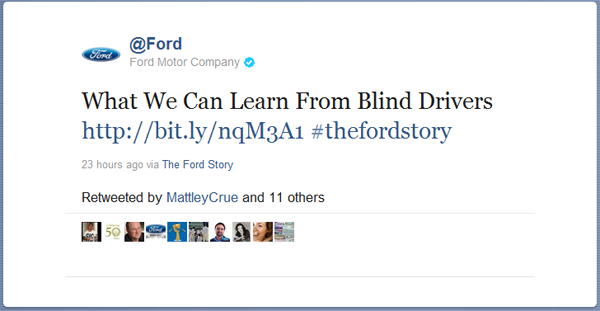 @Ford mixes the corporate approach with their online marketing message. They are constantly pushing #thefordstory hash tag which matches the title of their blog. By pushing resourceful articles they create a community-esque feel for the Ford driver. 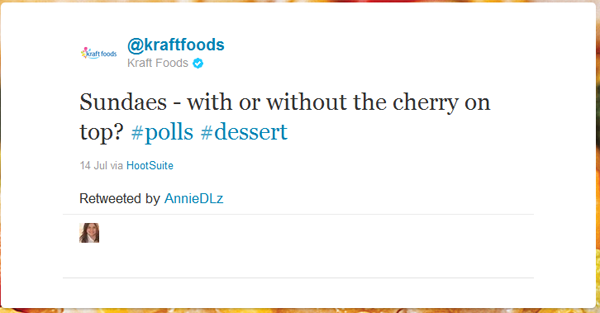 @KraftFoods can’t help but covertly push their products by providing you with great recipes to try out. Can you really blame them though? The company account mixes in the proper amount of user engagement by polling their followers on their favorite foods. Kraft expertly caters to the mom demographic.

I’m partial to @UPS because it bleeds with love. It’s covered in hearts because of their latest slogan “We <3 Logistics.” Despite the relatively low follower count, the voice behind the account is very friendly and positive. The name of the game is human relations and positivity rules above all so it’s fair to say UPS is doing a good job on social media. 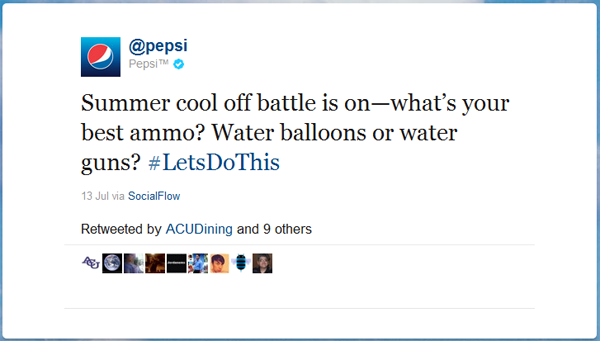 @Pepsi takes a cool approach because they take the least blatant effort to talk about themselvses. The soft drink giants seems to just be Tweeting for the fun of it. As a marketer I know it’s mostly for their branding effort. Needless to say it’s working as they have amassed over 100,000 followers.

I want to clarify that we have only examined the first 50 companies within the Fortune 500 henceforth the title is not missing a digit. We hope this article inspires those large corporations and small businesses that have avoided Twitter because it’s a new tool. It’s easily one of the best ways to reach your consumers. The business world should start to see Twitter as one of the primary consumer communication channels available.