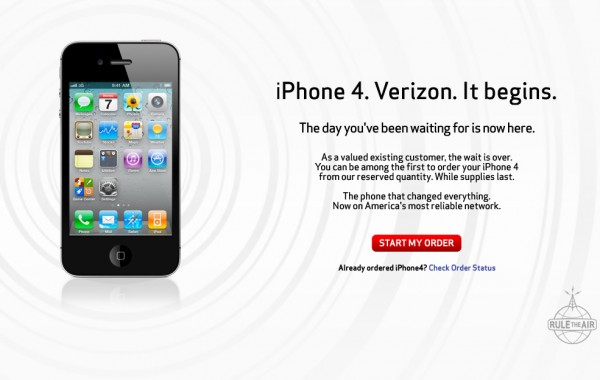 Today is the first day you can order the Verizon iPhone (at preorder.Verizon.com/iconic or at the Apple Store). To prepare for the network load once the phones are delivered, Verizon will automatically reduce image and video file sizes, as well as reducing data speeds for the top 5% of data users. MacWorld has the scoop:

The first practice involves optimizing and transcoding some content in order to reduce the strain on its network capacity. The idea is that automatically reducing the file sizes of images and videos will help keep Verizon’s tubes from getting clogged. The carrier also attempts to skirt claims of net neutrality foul play by stating that its optimization process is agnostic to content and the Websites it is coming from. Further, while “any change to the file is likely to be indiscernible,” you may notice some “minimal impact” on appearance. The document does not specifically warn owners of the iPhone 4 and its high-resolution Retina display, but it probably should.

The second new network management practice Verizon announced in this document, and one that the carrier ties specifically to a launch date of February 3 (the first day that Verizon began offering pre-orders for its version of the iPhone 4), is bandwidth throttling for heavy users. “If you use an extraordinary amount of data and fall within the top 5 percent of Verizon Wireless data users,” the document says, “we may reduce your data throughput speeds periodically.” Verizon says it will police your data connection only during your current billing cycle and the cycle that follows, though, so it sounds like heavy users won’t be placed on a permanent black list.

Verizon finishes with a very Vulcan justification for its practice of throttling the few for the good of the many. “Our proactive management of the Verizon Wireless network,” the document reads, “is designed to ensure that the remaining 95% of data customers aren’t negatively affected by the inordinate data consumption of just a few users.”

When it comes to AT&T’s mistakes, Verizon is an apt pupil. If it pulls the Verizon iPhone launch off without network hiccups, it will be the corporate equivalent of thumbing its nose at AT&T.

Read this article for a more detailed breakdown of the new Verizon iPhone, and a comparison with AT&T.