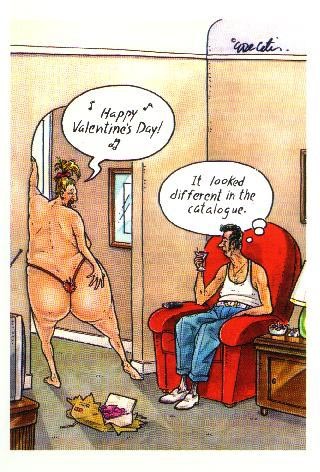 Proud to be an American? There’s reason. We have a beautiful country filled with natural and man-made wonders. We’re home to some of the world’s most talented business innovators. And we, the people, reserve the right to sue anyone we want for anything we want.

You’re next, Victoria’s Secret. Because there’s nothing like an unruly thong to provoke a latent lawsuit. How the woman damaged her eye with her underwear is beyond me. But does she really need Vic’s to reimburse her for it? According to ABC News,

The thong, a Victoria’s Secret Sexy Little Thing low-rise v-string, had a heart-shaped pendant attached to the fabric with a metal fastener, according to the lawsuit. When Patterson was changing after work, the metal piece snapped, creating a “slingshot effect,” and either the pendant or the metal piece “cut her eye…”

Here are 15 more of the nation’s dumbest corporate lawsuits. Just in case you needed reminding:

15. A Florida woman sued a guide-dog school because a blind man being guided by one of the dogs stepped on her foot.

14. A man sued McDonald’s for “failing to warn customers about the dangers of eating and driving.” The impetus? A man who’d spilled a milkshake on his lap at the drive-thru collided with the defendant’s car.

13. An Idaho college student decided to moon his friends, and fell out the window as a result. So he sued the college for not providing enough warning signs in upper-story windows.

12. A dry cleaner lost Roy Pearson’s pants, causing him great mental suffering. He alluded to the dry cleaner’s “satisfaction guarantee” as an excuse to sue the company for $67 million.

11. A man from Montana sued Viacom for plagiarizing his name. The man’s legal name is Jack Ass, and Jack Ass sued because the TV show Jackass infringed on the copyright and trademark of his name. And “defamed his good character.” (The man, nee Bob Craft, changed his name to Jack Ass in 1997 in order to “raise awareness about drunken driving.”)

10. A convenience store worker in West Virginia injured her back while opening a jar of pickles. The store awarded her $2,699,000 in punitive damages, $130,066 in compensation and another $170,000 for her emotional distress.

8. A pair of Chicago attorneys filed a class action suit against Penthouse magazine, because they failed to “see tennis sensation Anna Kournikova without her racket and tennis outfit.” The damages? $8.99 each, or the price of the magazine.

7. Consumer Meredith Berkman filed a class-action suit against Robert’s Foods, who make a snack called Pirate’s Booty, for $50 million. Four months prior, Robert’s had recalled its product because food labels understated calories by 27 and fat by 6 grams. Berkman’s suit claimed “emotional distress” and “weight gain…mental anguish, outrage and indignation…The complaint claims to represent all consumers who ruined their diets and had to spend more time at the gym because they ate mislabeled Pirate’s Booty.”

6. In 1995, passengers on an LA-New York American Airlines flight experienced extreme turbulence for 20 seconds. Passengers sued the airline for the “psychological impact of the twenty eight seconds of terror.” Their reward? $2 million.

5. Nita Bird, a woman having outpatient surgery, had something go wrong during surgery. Surgeons rushed her down the hallway into another room in order to save her life. Her two daughters saw their mother being rushed down the hallway, appearing to be in extremely poor physical condition. The two daughters sued the doctors and the hospital for causing them emotional distress. They shouldn’t have had to see Mom like that, and it was the hospital’s fault. That case was lost–in the California Supreme Court.

4. Bennie Casson had a stripper slam him on the head and neck with her two 40-pound breasts, contusing and bruising his neck. He sued the strip club for $200,000 for the mental anguish, indignity, and emotional distress he experienced after the incident.

3. Employees at the Las Vegas Hilton and Mandalay Bay Hotel kept handing a drunk man money to gamble with. He had a hard night, losing more than $1 million. So he sued the two hotels for supposedly knowing he was “drunk as a skunk” and continuing to give him gambling money anyway.

2. A British dollmaker with dark tastes decided to turn Barbie into a “Dungeon Doll” in rubber bondage dress and a helmet. Mattel sued the dollmaker for copyright infringement. The judge wrote them off, claiming the Dungeon Doll poses no threat to regular Barbie sales.

1. Yup, here it is again. The infamous 1992 McDonald’s coffee case. Stella Liebeck spilled McDonald’s coffee on her lap in the drive-thru, scalding her genitals, buttocks, and inner thigh. She received more than $2.7 million in damages. (To her credit, she wasn’t the first one to have trouble with Micky D’s scalding coffee.)