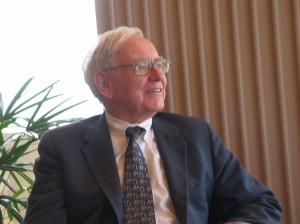 The WSJ takes a closer look at what makes the Oracle of Omaha in modern times:

Mr. Buffett’s skill at picking publicly traded stocks pales alongside the value he has added to the company through other means.

As recently as 1995, 73.5% of Berkshire’s total assets consisted of a portfolio of publicly traded stocks that (at least in theory) any investor could have replicated. As of June 30, though, Berkshire’s stockholdings made up just 25% of its total assets.

Mr. Buffett’s stock picks used to drive the train; lately, they are more like the caboose. He has been buying private firms outright and landing “sweetheart” deals in public companies.

Throughout Mr. Buffett’s long career, he has changed tack repeatedly. At this point, he is on a course most investors will no longer be able to follow.

Good point. As it stands, most investors can only hope to follow Buffett’s original value investing course. His style is now so highly individualized and conditional that emulators have to be both incredibly wealthy and connected to keep pace.

I reckon it only adds to his intrigue.