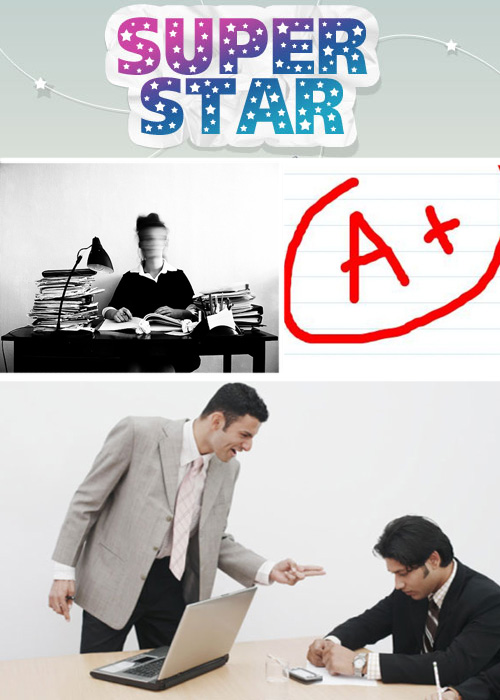 In a recent study, scientists combed the Earth looking for an elusive creature spoken of only in hushed voices over dimly-lit campfires and mostly-empty water coolers (didn’t someone tell Steve to replace that? Steve, come on man it’s your turn).  Referred to colloquially as “A Good Boss” and scientifically as Notdouchebaginus Zeromicromanaginicus, scientists found this creature to be startlingly common.  The important caveat was that satisfaction with one’s boss is highly correlated with income, meaning the more you make, the more you’re willing to put up with.  For those of us making under $75,000 a year, our boss is more likely a person who makes the already unpleasant activity of working in an office that much more miserable.  But anyone who’s had a terrible boss can attest that it’s not just the yelling, patronizing, or coming into work to find a giant steaming dump on your keyboard.  The worst part is the Orwellian double-speak they obviously picked up from their more competent counterparts elsewhere and corrupted well beyond their original meaning. Phrases such as: 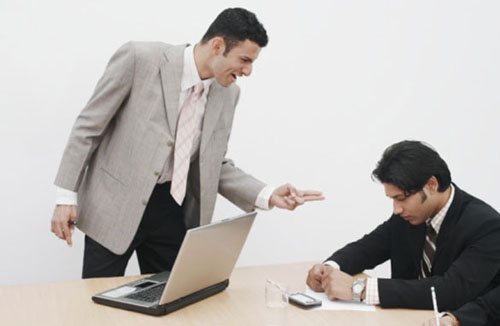 What they think it means:
Despite the stereotype of the ineffectual, demanding boss, there are plenty of totalitarian taskmasters out there that are very good at running things.  Steve Jobs, for example, was notoriously demanding and unforgiving.  In a business setting, you need someone who can set a clear vision for the company, punish employees who don’t live up to that vision, and generally be the dynamo that powers the whole process.  Good examples of these types of bosses are often described as “hard, but fair” despite that phrase always sounding like a euphemism.  Unfortunately your terrible boss saw these other good bosses and learned the easiest and most evident, but also the most wrong lesson: being a good boss means being demanding, and nothing else.

What it actually means:  “I forgot about this”
For a variety of reasons, this phrase is particularly common in the financial industry.  Usually, because of the speed at which the industry hums along 24 hours a day, you’ll hear it on a trading floor because someone literally needed something yesterday.  Unfortunately, your terrible boss decided they want to flex their managerial muscles when something falls through the cracks (and something always falls through the cracks), so they spout this utterly meaningless phrase.  If you’re having a hard time understanding why this command can be so frustrating, let’s lay out what usually happens because of its maddening vagueness:

Step 1: Terrible Boss says “I want it done, and I want it done yesterday!”
Step 2: Terrified employee asks for clarification, the boss yells the phrase again so as to appear bold and demanding
Step 3: Terrified employee thinks “Oh so this is my highest and most immediate priority”, and focuses only on this task to the exclusion of their other responsibilities
Step 3: Everyone wonders why nothing is getting done, but since they depend on Terrified Employee for a variety of responsibilities, they can’t finish their work
Step 4: Company grinds to a halt, Terrible Boss blames Terrified Employee for doing exactly what he was told to do
Step 5: Do not profit

“I work all the time, so should you” 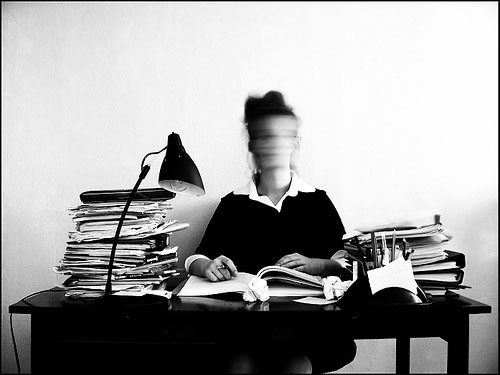 What they think it means:
Anyone who’s worked in an office at a level above temp can tell you that “40 hours a week” is more of a weak guideline that will be curb-stomped and left for dead in a coffee-fueled rage on three hours of sleep in three days.  Weeks easily stretch to 60, 70, and 80+ plus hours, and that’s just what’s expected to justify the gobs of money you hope to make.  Believe it or not, this often pays off, as those low-level Analysts that stick it out frequently end up making more money than anyone under 35 should be trusted with.  The reason they were able to do this was usually because their boss led by example, putting in insane hours themselves, and always carrying their work phone even though it made them look like a douche when they set two Blackberries on the table at dinner.  In other words, it was a shared sacrifice based on mutual respect.

What it actually means: “I don’t have to pick up the phone when you call, you do”
First off, if your Terrible Boss honestly put in the long hours and hard work of the good bosses above, they likely don’t fall in to the Terrible Boss category.  More than likely, they don’t work that hard, they just say they do.  No one ever corrects them because, one, who’s going to call the boss lazy, and two, it allows everyone else to goof off with wilder abandon.  The expectation for how much work will get done is lowered because everyone’s in on the “Man I work so hard [opens Farmville]” joke.

This isn’t the bad part.  The bad part is that the Terrible boss will leave early, take long lunches, and generally faff about because when something needs to get done, he can always put it off or make someone else do it.  He’s the boss like that.  (A good boss doesn’t abuse this privilege, but we’re not talking about them).  Except when he wants something done, you are expected to be on call 24/7 because you foolishly submitted to this charade so that you could browse Facebook and get paid for it.  Now while the lazy employee deserves some blame here, and indeed for all of the failures mentioned in this list, the fish rots from the head, as they say.

“We need to hire a superstar” 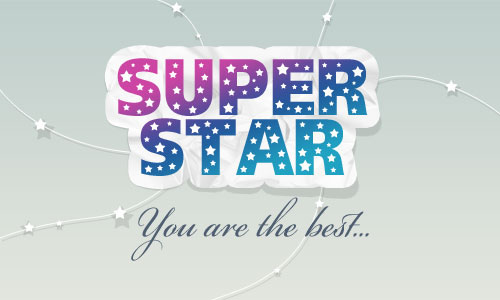 What they think it means:
Everyone knows that person in the office.  The one that puts in the extra hours, goes the extra mile, and who wows and charms both clients and coworkers.  They are the drive shaft that makes the well-oiled engine of the company hum like a song.  They are rare, but with enough searching and careful cultivation, they can be found.  While a company needs so much more than a handful of superstars, often the sheer driving force of them will push quality and productivity up, inspiring employees and managers alike to work harder and better.

What it actually means: “We are so fundamentally fucked”
No superstar employee is going to fix a company that is already fundamentally broke, and if Terrible Boss even feels the need to utter this phrase, it usually is.  First off, superstars are there to be had, but because they’re so good they are usually incredibly expensive.  Second, even if you do manage to find a diamond in the rough, many of the company’s problems likely stem from the Terrible Boss herself.  No employee, even an extremely capable one, can get much done when they are being, say, micromanaged, harassed, and given confusing priorities.

So when this phrase comes out of Terrible Boss’s mouth, it usually means something closer to “Everything is wrong. I don’t know how to fix it.  I don’t possesses the self-awareness to fix myself.  Let’s try to find someone to shift the responsibility on to”.  And in her mind, it sounds like she’s calling for high-powered, hard-charging, silicon valley corporate culture instead of meekly drowning in a lack of perception.

“We are going to do this perfectly, no mistakes” 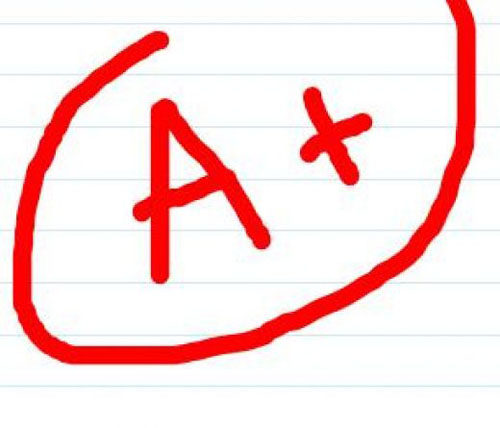 What they think it means:
Of course, every office strives for perfection on every project.  But here’s the thing, it is really, really hard to avoid the millions of mistakes that can get made every day.  Reams and reams of business literature have been written on how to ensure quality of the highest degree.  It often doesn’t involve working harder or more intensely, but putting into place the proper procedures to eliminate the most error-prone step of the process (that part is the humans…for now).

What it actually means: “I will micromanage this shit into the ground”
One of the biggest problems with Terrible Bosses is that a combination of arrogance and misguided good intentions frequently leads them to micromanage their employees.  This creates the perverse incentive where employees end up tailoring projects, products and procedures exactly to their Terrible Boss’s specifications, instead of improving on them when the opportunity presents itself.  The exacting nature of micromanaging also leads employees to shoot for the boss’s specifications, and no further.  This is because the first thing out of Terrible Boss’s mouth when shown a project isn’t “What can we improve here?” or “Oh that’s interesting, what was the idea behind this?”.  It’s usually more along the lines of “Why didn’t you do what I said?”

This is the result of the Terrible Boss wanting and demanding perfection, but not realizing that unless he is Steve Jobs or an OCD genius, he is going to miss things.  And the harder he tries to control more of the process, the less responsibility employees will feel to double check themselves or, god forbid, innovate on top of Terrible Boss’s design.  Ironically, shooting for perfection is worse in this scenario than shooting for “as good as we can do”, because Terrible Boss will have fewer chances to mess things up.  More importantly, employees will be responsible for their own slice of the project, meaning if something goes wrong they don’t have the excuse of “I just did what you told me”, and a productive conversation about what went wrong and how to prevent it in the future can ensue.

“Summarize it for me” (Alternately, “Bulletpoints”) 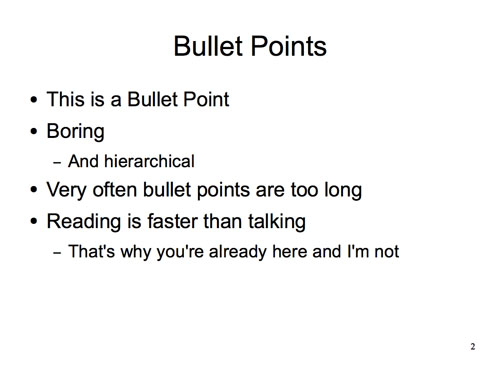 What they think it means:
As boring as they are, regular updates and progress reports are important to make sure everyone is on the same page, time doesn’t get wasted working on overlapping areas of a project, and the boss — who is likely overseeing many teams simultaneously — knows what is going on.  A good boss keeps up to date with the reports, comments on the progress, and addresses problem areas.  This is all really basic stuff.

What it actually means:  “I will never read this”
Unfortunately, if your boss actually kept abreast of what was going on and tried to address problems, he wouldn’t be terrible.  Not only do most of your e-mails sit unread in his inbox, he will often call you later to ask for a verbal summary.  Worst of all, when something goes wrong (and it will), you will ineffectually point to your numerous e-mails on the subject, to which your Terrible boss will reply “you should have called me”.

It is frustrating because with a Terrible Boss the real problem will never get addressed, but to make things even worse it turns out that your boss is actually speaking an entirely different language.