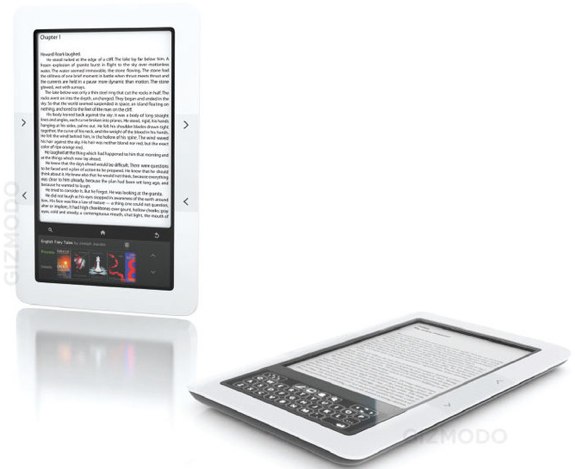 Barnes & Noble’s new e-reader, the Nook, goes on sale next Tuesday. Wired calls it a Kindle-killer:

The reader…looks a lot like Amazon’s white plastic e-book, only instead of the chiclet-keyboard there is a color multitouch screen, to be used as a keyboard or to browse books, cover-flow style. The machine runs Google’s Android OS, will have wireless capability from an unspecified carrier and comes in at the same $260 as the now rather old-fashioned-looking Kindle.

But it’s the details of the Barnes & Noble service itself that have us really interested. Gizmodo, which first broke the leaked images, has information that B&N will be discounting titles heavily in their electronic format, which is as is should be (no paper, printing or shipping costs). The Nook will also be able to get books from the Google Books Project.

And over at the Wall Street Journal, somebody got a peek at an at ad set to run in The New York Times this coming Sunday. The ad features the line “Lend eBooks to friends,” and this has the potential to destroy the Kindle model. One of the biggest problems with e-books is that you can’t lend or re-sell them. If B&N is selling e-books cheaper than the paper versions, then the resale issue is moot. And lending, even if your friends need a Nook, too, takes away the other big advantage of paper.

It’s nice to finally see some real competition in the e-reader space. The Wall Street Journal revealed yesterday that the Nook would cost $259.