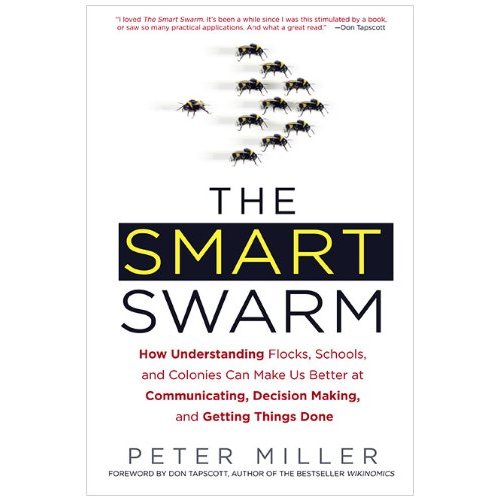 For being at the top of the food chain, humans aren’t terribly evolved. Give us a complex situation like, say, a credit meltdown with a zero accountability, and we drape a TARP and hope it will just go away. Individual humans just aren’t good at making hard decisions in complicated situations.

That said, a smart, carefully tuned group of us could be. Ants, which aren’t too smart as individuals, do it. Bees do it. Even educated humans do it, given the right circumstances.

A smart swarm is “a group of individuals who respond to one another and to their environment in ways that give them power, as a group, to cope with uncertainty, complexity and change,” according to the National Geographic senior editor Peter Miller, whose book The Smart Swarm: How Understanding Flocks, Schools and Colonies Can Make Us Better at Communicating, Decision Making, and Getting Things Done dives into the dynamics of how large groups function in nature. Miller uses the relatively new science of understanding flocks, schools, and colonies to make his points about how smart swarms operate.

This “science of collaboration” is relevant to business, especially considering how much the Internet has boosted human collaboration. Ants in a colony assign just the right number of workers to each job every day—can you imagine the competitive advantages of having similar flexibility in your own company? Miller explains how businesses use the mechanics of the smart swarm to optimize manufacturing, routing trucks, networking phones, and more.

Each of The Smart Swarm’s well-written chapters features an example from nature—insects, fish, birds—to illustrate principles, or defining features, of a smart swarm. Miller peppers in knowledge from a span of other fields, too, including economics, political science, government, computer science, mathematics, robotics, physics, and even The Lord of the Rings. Each chapter also includes a case study; subjects include Boeing, the Iraqi municipal government, and the CIA.

Between the introduction and conclusion, the book has five story- and example-rich chapters:

• Chapter 1 explores how ants optimize changing conditions, followed by a case study on how gas supplier American Air Liquide uses a computer system with an ant-based algorithm to save it an estimated $20 million per year.

• Chapter 2 demonstrates the necessity of diversity of knowledge and friendly competition in a smart swarm using honeybees, Best Buy, Boeing, and a small town in Vermont.

• Chapter 4 uses flocks of sparrows, caribou and animation in Lord of the Rings to explore how individuals each play a subtle part in keeping their entire group on course.

• Chapter 5 explores what triggers peaceful swarms of locusts to go into mass destruction mode and create a plague; it applies examples to crowd disasters in Saudi Arabia and the Philippines as well as market bubbles.

What do you get out of all this research, case studies, and examples? A handful of principles that define a smart swarm, including:

• Individuals aren’t smart, but the colony is. A smart swarm self-organizes “from the bottom up, as the result of interactions among many parts.”

• A smart swarm distributes group problem solving through individual interactions. Miller uses the beach as a way to illustrate this. If you go to beach, you find a space for your towel that’s a comfortable distance from everyone else; if you look at crowded beach from aerial view, it’s a mosaic of evenly-spaced towels. Also, if a couple of people stand up and stare into the water, then a couple more do it, pretty soon everyone will be staring into the water in a collective state of alarm.

• The more choices a smart swarm has, the better it performs. A smart swarm made up of individuals with a diverse skill set leads to more choices. Assuming the group is structured right and given an appropriate task—necessary for it to be a smart, not dumb, group–friendly competition of ideas will let the best strategy percolate upwards. The smart swarm will then execute that strategy.

• Smart swarms are self-healing: “In an ant colony or a beehive, many individuals can fail to perform their jobs and the system still functions just fine, because many other individuals, sensing something different in their surroundings, adjust their behavior accordingly,” writes Miller.

Thanks to increased global interdependence and lightning-speed communication, business and government are itching for a model to replace the old hierarchical one. The Smart Swarm points us in the right direction.

This wasn’t clear to me at first, because each chapter in the book is so rich with examples and diverse stories that I had could only ruminate the book’s deeper implications after stepping away from it for a while. It’s a challenge to pick through and grasp everything. I can’t help but think there must be a better way to make each of Miller’s principles more accessible on the first read, eg. listing the principles in bold before the beginning of each chapter.

That said, The Smart Swarm was effective in that it introduced me to a whole new vocabulary and idea set around collaboration. I started reading the book with a preconceived notion that individual experts are the smartest problem solvers; the Smart Swarm cured me of that.

It’s also very well written. Miller includes reams of quotes, references to books, research, and case studies to make his points. He clearly did his homework; his writing integrates everything smoothly.

The Smart Swarm provides relevant, quality information that everyone in the Information Age should know about. For that reason, I recommend it to everyone, with a caveat—it helps if you’re a close reader.

Disclosure: We received a free copy of The Smart Swarm.