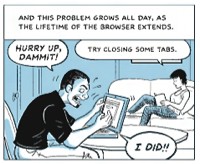 Google’s Chrome, a new open-source Web browser, will be released in 100 countries on Tuesday. An official Chrome comic made its rounds through the blogosphere today, causing megabytes of speculation and uproar.

“Why are we launching Google Chrome? Because we believe we can add value for users and, at the same time, help drive innovation on the web,” Sundar Pichai, vice president of product management, and Linus Upson, Google engineering director, wrote in a blog post.

Google was apparently looking to keep news of Chrome under wraps until after the holiday weekend. A 38-page, online comic book that provided details about Chrome hit the blogosphere Monday morning, but Pichai and Upson said in their blog post that Google had “hit ‘send’ a bit early” on the web comic.


Big news? Certainly. I won’t quit Firefox over it, but I think that Google will come up with something good. See update.

Update: Chrome is now available for download on the Google blog. Upon taking a closer look at the browser, I realized that it wasn’t designed to tear away anyone’s market share. It’s not revolutionary enough for that.

Nonetheless, true to Google’s founding vision of changing the way people use the Internet, Chrome is an open-source link between old-school Web browsing, which separated applications from websites, to a new school in which apps merge with the Internet.

I still won’t be quitting Firefox over it, but I will look forward to Mozilla implementing some cool new changes.