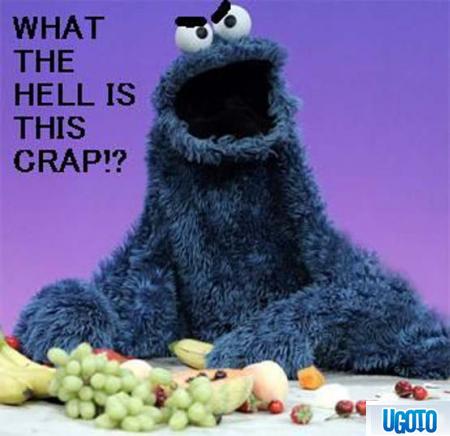 Rumor has it that Cookie Monster is turning into a health-crazed Veggie Monster in an effort to combat childhood obesity. This isn’t the case, but Cookie Monster isn’t quite what he used to be, either. The Big Change in cookie monster actually occurred in 2005, but the rumor has found its way back to the Web. CBS reported the scoop three years ago:

My beloved blue, furry monster — who sang “C is for cookie, that’s good enough for me” — is now advocating eating healthy. There’s even a new song — “A Cookie Is a Sometimes Food,” where Cookie Monster learns there are “anytime” foods and “sometimes” foods.

“What’s going on with Cookie Monster?” I asked the “Sesame Street” press office. “Why are you doing this?”

They sent me to Dr. Rosemarie T. Truglio, the show’s vice president of research and education.

She said the show changes every year, focusing not just on teaching numbers and letters but also emotional and physical health. With the rise in childhood obesity, Truglio said “Sesame Street” is concentrating on the need to teach children about healthy foods and physical activity.

Truglio said “Sesame Street” also will introduce new characters, such as talking eggplants and carrots, and offer parodies, such as “American Fruit Stand.” Even guest stars will address healthy activities, such as Alicia Keys talking and singing about the importance of physical activity.

Even politicians have gotten into the act, filming public service announcements with “Sesame Street” residents. In one taping, Senate Majority Leader Bill Frist taught Elmo to exercise — jumping up and down. In another, Sen. Hillary Clinton and the small red monster discuss the various textures and tastes of foods.

“Even Cookie Monster is learning to control his cookie cravings,” Frist told me by e-mail. “His sage advice opened our eyes to the simple joys of a tasty cookie and now reminds us that moderation is the key to healthy living.”

The big question is: Does this stuff work? It has to, to some extent. Companies like McDonald’s fatten kids by luring them in with attractive Happy Meals. Surely Cookie Monster and talking vegetables can make healthy food look less nasty to young ‘uns, too. But parents remain the bottom line. Social propoganda campaigns remain peripheral to the lifestyle parents encourage their kids to live.

Personally, I’d rather see reams of money being pushed into organizations that promote better parenting. If parents are responsible, TV won’t ever have the final say.