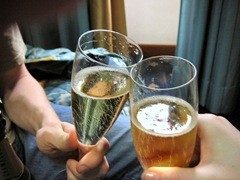 Forget about your faith. Forget about your politics. This blog is about business and as it turns out, gay marriage would rock our economy. Studies by the Williams Institute for California and New Jersey project over $82 million in revenue to benefit those states over the next three years.

Bring on the economic stimulus! The numbers will start out astronomically high as a predicted 50% of same sex couples marry in the first heady years. Even after it tapers off, we can expect gay couples to marry at the same rate as their straight counterparts. The most accepted estimates tell us that 10% of Americans are gay. Even those who’d rather they didn’t exist concede the number may be as high as 5%. Okay, so somewhere between 5% – 10%.

The percentage may sound low, unless you’re a numbers person. According to the Association for Wedding Professional International, the wedding industry in the United States rakes in approximately $86 Billion a year. This doesn’t include honeymoons (that’s tourism) and household items (the registry). And if you count everything purchased within 6 months before and after the wedding, we’re talking over $120 Billion. Now, you numbers people – tack on 5%-10%. Sure, that’s oversimplifying things, but it’s a big number any way you slice it.

According to the Williams Institute, state and local revenues from taxes and licenses alone would equal $63 million in California during the first three years. And that doesn’t begin to touch the government savings of caring for children who could be legally adopted by gay couples.

The most interesting part of the studies is the analysis concerning gay couples going to the state in question to marry because their own state forbids it. It will be interesting to see how the states line up when the dollars and jobs that come with gay marriage are more widely understood.

What happens in ten years? Because gay couples are no different than everybody else, once they get sick of each other and start cheating, they’ll transition nicely into the ‘relationship industry’. Win-win-win!

Forget about McCain and Obama, let’s get that Queer Eye guy to run for President. Who’s with me?

Get more information for your state here.