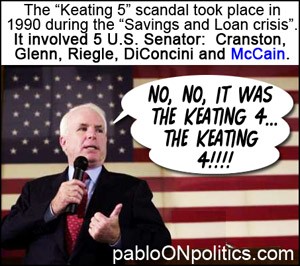 The Obama campaign (has emailed) its supporters a link to a new Website called KeatingEconomics.com that features a 13-minute documentary on the savings-and-loan scandal. The Keating Economics Website also includes a timeline and newspaper articles explaining in detail the nearly twenty-year old scandal.

The Web ad shows footage of the senate trials of the five senators, including McCain, all of whom were accused of improperly aiding Charles Keating, chairman of the failed Lincoln Savings and Loan Association and a political donor who went to prison for fraud that led to the bank’s collapse.

The failure of California-based Lincoln Savings led to more than 20,000 mostly elderly investors losing their life savings and at the time was one of the largest financial failures in history. In 1991 the Senate Ethics Committee cleared McCain of acting improperly but said he exercised “poor judgment.”

The campaign says that McCain’s involvement in the Savings and Loan crisis directly impacts the current economic problems and is indicative of a mindset of deregulation and lack of oversight that led to the financial industry meltdown.

I’m not a fan of the Keating or the Bill Ayers smear. I’m not voting for McCain, but in this case, I think that his involvement in the Keating scandal–which involved four democrats and McCain–was more of a painful lesson than an indication of his ongoing poor judgment.

Wikipedia sums up the Keating scandal in two sentences:

The core allegation of the Keating Five affair is that Keating had made contributions of about $1.3 million to various U.S. Senators, and he called on those Senators to help him resist regulators. The regulators backed off, to later disastrous consequences.

This isn’t exactly unprecedented behavior for politicians. McCain and the others allowed themselves to be bribed. A dumb move, yes, but it happened nearly 20 years ago. It was almost political suicide for the old man. You’d think he learned his lesson.

I’m voting for Obama because I’m convinced he’ll do a better job running the country. But that doesn’t mean McCain is an archangel of political corruption. I hope the two parties start talking about real solutions during tomorrow’s debate, rather than focusing on half-baked smears.