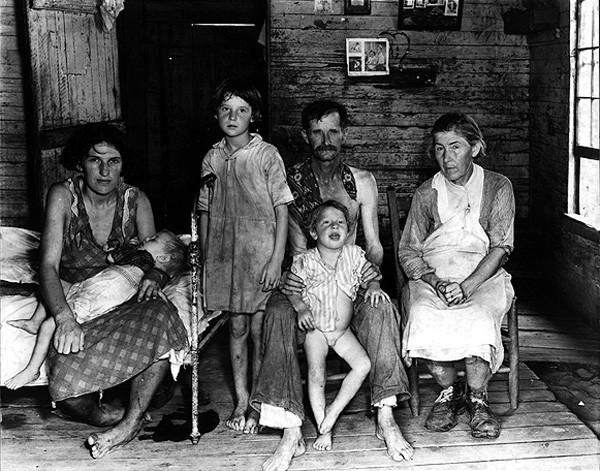 I have to get this out of my system. BP’s interview with historians Michael Allen and Larry Schweikart helped assuage my fears some. Facts aside, I still entertain terrible daydreams of the Great Depression II emerging out of our mess of collapsed banks like some undead bayou creature.

After reading Glenn Beck’s CNN article (based on information from New York economist Nouriel Roubini), I came up with a step-by-step descent into Depression II.

I’m not advocating this as reality. I have a lot of hope that it won’t get to Step 6. But by expressing my scenario into a post, I hope to gain a more neutral, involved perspective on where we are now, untainted by sharp-edged visions of America the Starving.

The first five steps are informed by Beck’s article. The last, Step 6, is my own conjecture:

3. Banks fall like dominoes under the pressure of their write-downs. *We’re here.*

5. Banks hoard money, making it nearly impossible to get credit. Want a new car? A new house? A new credit card? Forget about it. Banks don’t trust you; you don’t trust them. Without access to credit, you can’t get that loan to start up the new business you’ve been planning. You can’t go back to school. You can’t get that new Toyota Hybrid. You and your family can’t upgrade to a larger home. You and the bank are now both hoarding money, and there’s no exchange process. The economy relies on exchanges, or transactions; without them, it slows dramatically.

6. This is the doomsday scenario people rant about. To me, it looks something like a developing country (I’ve visited many), but angrier. Here’s the scenario:

Structural Challenges
Grocery stores run out of food. Bridges collapse and don’t get fixed. Natural disasters will continue to scour the continent, but, due to lack of funds, some destroyed areas will simply be left collapsed. Things like air travel become prohibitively expensive—no more visiting the family during the holidays.

Social Adaptations
Lucky enough to have regular work, but unable to afford gas, you start hiring out your car as a taxi, picking up people on the way to work, negotiating fares in advance. If you’re in a larger city, you may see outbursts of violence, such as riots. If you live in a tight-knit community, you’ll join local incentives, such as community gardens and car-shares; perhaps even a local currency.

Scams and theft will become more commonplace. The usual industries—alcohol and prostitution—will burgeon. You may see increasing numbers of foreigners buying up vacation homes and regular properties in your community.

Socially, things will be unstable. Many people, feeling angry and disenfranchised, will lash out at other groups or individuals. More stable people will become increasingly concerned about safety, perhaps hiring low-wage security guards for their buildings or refusing to go out after certain hours.

Online and offline swap markets will boast screaming deals as people offload their extra belongings for money. Barter and trade networks will thrive. Skilled creative people will come up with incredible inventions growing out of the need and scarcity around them. We could see some breakthroughs music and art.

Government
Government will take on a strong, visible role, either as a nanny or a strong-armed dictatorial force. Citizens must keep a close eye on government moves NOW to avoid an even more complicated future.

It sounds glum. But it isn’t, not yet. We need to get the credit machine oiled up again. Loss of credit is correlated with loss of confidence. Government inaction, indecision about the bailout bill, drains banks of crucial confidence. When banks refuse to lend to us, we lose confidence. Only then does the economy goes to sleep.

We’re still teetering on the edge of this. Contact your Congress and Senate people. Vote. Adapt your business to serve people better in a recession. Start a new one. Tell your employees or boss what needs to change. Be a good business advocate and a citizen. You still count. Make sure people around you know that.

Feels good to get that off my chest. I want accept the possibility of doomsday, then do everything in my power to help circumvent it, both on a personal and communal level.

What does your doomsday look like? What are you going to do about it?