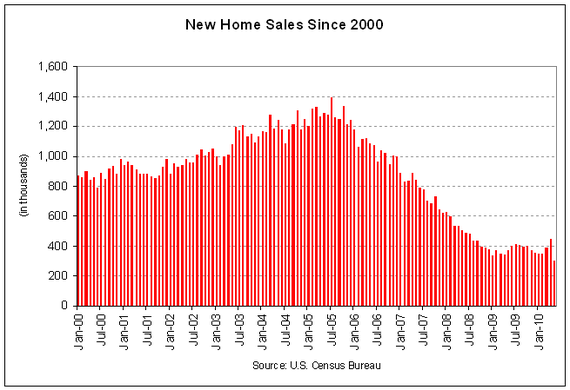 New home sales are dismally low. You could blame the weather, but the truth is that when you can’t find a job or your income down, banks aren’t very excited about loaning money to you, and you don’t have much faith that things will pick up soon, you don’t buy yourself a new home. You rent or pick up one of the many foreclosures on the market. NPR has more:

New-home sales dropped to a seasonally adjusted rate of 284,000 homes last month, the Commerce Department said Thursday. That’s down from 325,000 in December and less than half the 600,000-a-year pace that economists view as healthy.

Last year was the fifth consecutive year that new-home sales have declined after hitting record highs during the housing boom. Buyers purchased 322,000 new homes last year, the fewest annual total on records going back 47 years….The median sales price of a new home sold in January was $230,600, down 1.9 percent from the month before….About 188,000 new homes were for sale at the end of January, the lowest level since 1967.

Sales of previously occupied homes have not fared much better. While sales rose slightly last month, the seasonally adjusted annual pace of 5.36 million is still far below the 6 million homes a year needed to maintain a healthy market.

New home sales are an indicator of the health of the construction industry, which “normally powers economic recoveries” (or not), writes NPR. So what are people buying? According to the HSH blog, the end of the Obama tax credit means less first-time homebuyers are in the fray. More than 1/3 of properties sold in December were distressed properties, investors bought 20% of homes, and 29% of sales last year were all-cash transactions.