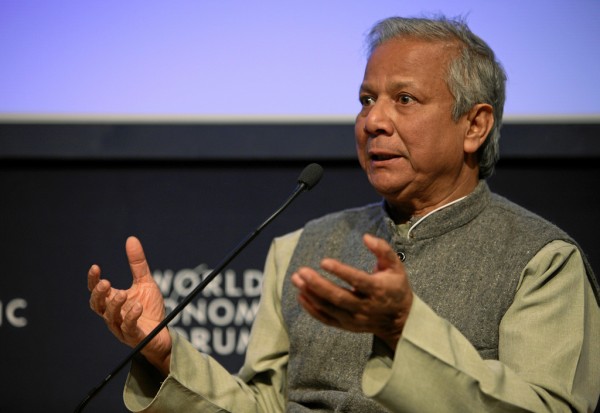 Nobel Laureate and Grameen Bank founder Muhammad Yunus is under investigation for diverting nearly $100 million in grant money from microcredit lender Grameen Bank, for which the money was intended, to Grameen Kalyan, a branch that helps Grameen members stay healthy. Yunus, who heads 30 non- and for-profit organizations under the Grameen umbrella, is denying the allegations. From the BBC:

A documentary maker has alleged that cash was diverted from Professor Yunus’ Grameen Bank to other parts of Grameen. (Filmmaker) Mr Heinemann’s report alleged that after the Norwegian authorities raised objections to the alleged transfer of funds, the Grameen bank returned about $30m. The aid money was from Norway, Sweden and Germany.

In a statement, the bank said that the allegations were false. It said that a full explanation with more details would be provided at the “earliest convenient time”.

The move by the Norwegians – who insist that no criminal activity has taken place – comes at a time when the reputation of the micro-credit industry has been under attack. The original aim of the micro-credit concept was poverty reduction, but in recent years some micro-financial institutions have been criticised over exorbitant interest rates and alleged coercive debt collection.

Reacting to the latest report, the Norwegian authorities say they have no suspicions of tax fraud or corruption committed by Grameen Bank. “Having said that, the Government of Norway finds it totally unacceptable that aid is used for other purposes than intended no matter how praiseworthy the causes might be,” Norwegian International Development Minister Erik Solheim said in a statement e-mailed to the BBC.

I saw Yunus speak several years ago. He’s one of those very rare people who I think is incapable of corruption. Heinemann, the filmmaker, created a documentary that investigated how microcredit institutions around the world are basically turning into loan sharks. It’s part of his job to uncover indiscrepancies and make them public. But if Yunus’ Grameen did something wrong, I have real trouble either seeing it as intentional corruption or seeing Yunus behind it. It’s akin to Ghandi being corrupt. That said, the microfinance industry itself is turning out to be more shady (w/high interest rates) than anybody initially expected. I’m interested to see what happens next with this investigation.