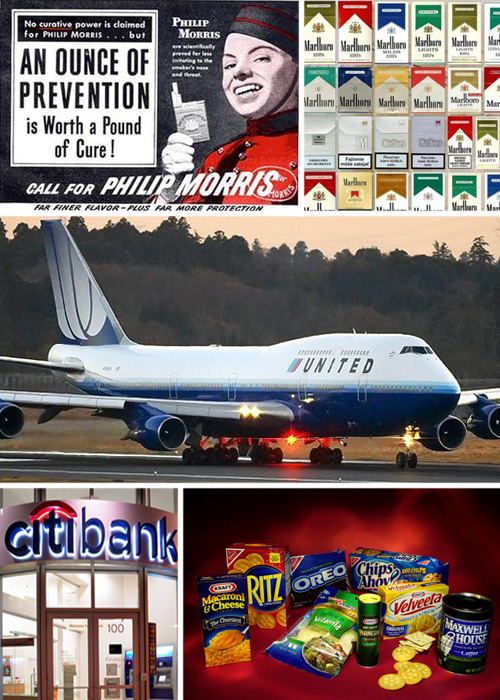 In all likelihood, you’ve never heard of Altria Group, Inc., but you’re probably familiar with their former name: Philip Morris Inc. The mega-corporation changed their name in 2003, probably realizing that, in the public mind, the name was permanently stained with Big Tobacco associations: it evokes images of dirty lobbying deals, unethical advertising, suppressed scientific studies, and the 443,000 deaths tobacco causes each year.

After the Master Tobacco Settlement Agreement in 1998, which cost the tobacco industry upwards of $246 billion in settlements, and the passing of several anti-smoking laws and advertising regulations, Philip Morris decided to reinvent itself. The name was the first thing to go. A document from the early nineties shows that the company had considered this move for a while, with executives wanting to be able to market themselves as “a company with a bright future and relatively low risk” to investors. In addition, the name change allowed Altria to fly a little more under the public radar, after years of being vilified as a company that peddled addiction and death.

To be sure, Altria still makes cigarettes. Its tobacco division is still named Philip Morris, and according to a financial report filed in 2006, roughly 65% of Altria’s revenues come from tobacco products. Altria produces about twenty different cigarette brands, including: Marlboro, Parliament, Virginia Slim, Basic, Chesterfield, Benson & Hedges, and a number of international brands like Fortune, Sampoerna A, Champion, and Canadian Classics. It also owns John Middleton brand cigars, and in 2008 bought UST, a “smokeless tobacco” manufacturer that makes Copenhagen and Skoal chewing tobacco.

Altria also has major stakes in food and drink manufacturing. Until 2007, it owned Kraft Food Inc., after which Altria decided to “spin off” the company, selling it off to investors. It still retains ownership of General Foods Inc. In acquiring UST, Altria bought out Ste. Michelle Wine Estates, a maker of premium wines. It also owns 27% of SABMiller, an international beer brewing company that owns Miller, Coors, Blue Moon, and Castle, among many others.

In addition, Altria is one of OpenSecret’s “heavy hitters” in lobbying. It routinely spends over $10 million in lobbying efforts a year, though this is actually far less than it used to spend, particularly in the late 90’s. In the late 90’s, knowing that tobacco regulation reform was inevitable, Altria exerted its considerable influence to use FDA oversight to enhance its corporate image. In this same vein, Altria also supported the 2008 Tobacco Regulation Bill. Meanwhile, behind closed doors, Altria lobbyists worked to defeat legislation that worked in the public’s interest, such as food labeling, recycling, and reducing smoking in the military.

A look at the excellent website Muckety.com shows the web of influence that spreads out from Altria/Philip Morris’s executives. Members of its board of directors also sit on the boards of Virginia Electric and Power Co., Swiss Re, the New York Stock Exchange, HSBC bank, Marriot International, and Western Union. They’ve served in presidential cabinets and as executive editors on The Economist. They’re the chairmen and CEO’s of United Airlines, Chrysler, Citibank, and the Lehman Brothers.

Philip Morris, almost a decade after their makeover and name change, is still just as influential as it ever was. More than ever, the company resembles some kind of malignant tumor, growing and spreading in the unlikeliest of places.