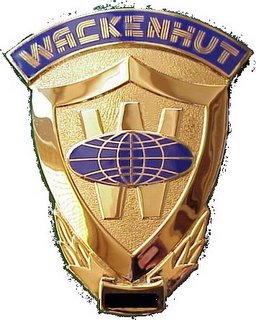 The Project on Governmnet Oversight (POGO), a nonprofit dedicated to exposing government corruption, has documented lewd behavior by military contractors working for ArmorGroup, North America, a subsidiary of Wackenhut Security. Reuters has more:

Private contractors hired by the U.S. government have jeopardized security at the American embassy in Kabul with lewd, drunken conduct and an understaffed guard force at a time of rising violence in the Afghan capital, a watchdog group said on Tuesday.

The firm employs 450 guards to provide security at the Kabul embassy under a five-year, $189 million State Department contract. The department extended the contract in June.

Pictures obtained by the group showed male guards, scantily dressed in G-string style garments, dancing around a bonfire and urinating while others snapped photographs. Video showed them pouring alcohol down the bare backside of a new recruit and trying to drink it as it spilled from the man’s buttocks.

Additional violations include bringing prostitutes to the job, drunkenness, and lack of effective security due to language barriers. POGO has suggested that the State Department suspend ArmorGroup and Wackenhut from the position. Secretary of State Hillary Clinton has ordered an investigation into the case.

Wackenhut has not commented on the case.