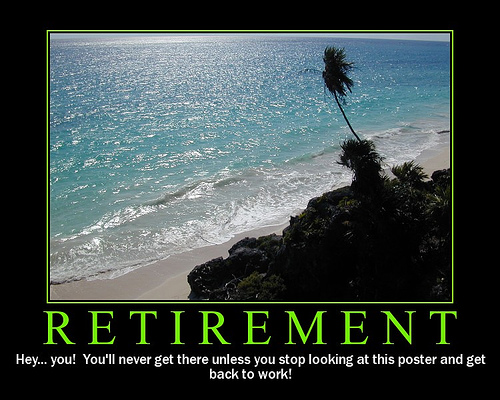 Will we work our entire lives? The Economist’s The End of Retirement addresses this question. It discusses how demography in rich countries will affect the way corporations and governments react to retirement:

WHEN Otto von Bismarck introduced the first pension for workers over 70 in 1889, the life expectancy of a Prussian was 45…(By) 1935, when America set up its Social Security system, the official pension age was 65—three years beyond the lifespan of the typical American. State-sponsored retirement was designed to be a brief sunset to life, for a few hardy souls.

Now retirement is for everyone, and often as long as whole lives once were. In some European countries the average retirement lasts more than a quarter of a century. In America the official pension age is 66, but the average American retires at 64 and can then expect to live for another 16 years. Average spending on public pensions across the OECD is now the equivalent of more than 7% of GDP (they cost America just 0.2% back in 1935). In some countries the current figure could double by 2050, to say nothing of the cost of private pensions and extra spending on health and long-term care.

This imminent greying of society is compounded by two other demographic shifts. First, in most rich countries women no longer have enough babies to keep up the numbers (a prospect that may please a lot of greens but not many governments); and the huge baby-boom generation, born after the second world war, has begun to retire. In 1950 the OECD countries had seven people aged 20-64 for every one of 65 and over. Now it is four to one—and on course to be two to one by 2050. That will ruin the pay-as-you-go state pension schemes that provide the bulk of retirement income in rich countries.

It is tempting to think that some of the gaps in the rich countries’ labour forces could be filled by immigrants from poorer countries. They already account for much of what little population growth there is in the developed world. But once ageing gets properly under way, the shortfalls will become so large that the flow of immigrants would have to increase to many times what it is now. Given the political resistance to even today’s levels of immigration (as shown up in the recent elections to the European Parliament), that, alas, looks unlikely.

Can governments make sure this inevitable adjustment goes smoothly? In the recent past some policies have bordered on the demographically insane—for instance “job-creation” schemes that encourage older workers to take early retirement. Many things that make sense anyway, such as making benefits more portable, encouraging immigration, promoting private saving or reforming health care, make even more sense now. Banning mandatory retirement ages in the private sector (as America has done) looks sensible, as does creating conditions in which people can retire more gradually. Above all, the retirement ages for state pensions need to be put back. Recent increases to 67 or 68 are doing no more than compensate for the likely rise in life expectancy: 70 would be a better figure. So far only Denmark has taken the radical step of indexing the pensionable age to life expectancy.

The article mentions how some corporations have worked around their bias against older employees. In Japan, for example, some big companies re-employ staff after retirement, but in different, lower-paying positions. Wal-Mart and McDonald’s hire retirees “because their customers find them friendlier and more helpful.” The author adds that when the overall labor force starts declining around 2020, employers will have no choice but to hire pensioners.

If The Economist’s model is actually the case, then there’s no point in accepting retirement as a concept anymore. The old model, which involves working really hard, saving up, and then enjoying the fruits of your labor, doesn’t make sense if you have to work into your 70s and 80s anyway. Why work hard in your youth if there’s no retirement? So you can quasi-support yourself while working part-time at McDonald’s?

If The Economist is right, then our society’s concept of work could radically change in the next decade or so. I’m not sure that it’s for the better.