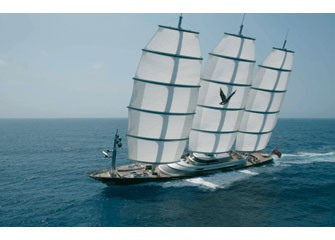 While the stunning Maltese Falcon features a hefty power plant to get it going, it also features three masts with five sails each–all of which are electronically controlled, and can be deployed in a few minutes. As one of the largest sailing yachts in the world, we wonder what Dashiell Hammet would say. Could this $165 million ship be “the stuff that dreams are made of?” 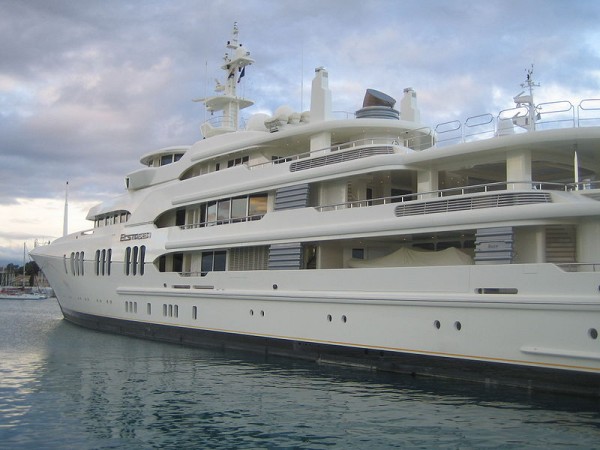 This 282-foot long, $200 million Feadship–meaning it was built as a joint venture between two particular Dutch shipyards and a Dutch maritime engineering firm–was originally the property of Russian oligarch Roman Abramovich. With a maximum speed of 30 knots, this baby blazes, and comes complete with an Asian-themed interior. Still, she must not have fit Abramovich’s bill, as it were. He only owned her for five years before selling her to somebody else, supposedly philanthropist and businesswoman Sonja Zuckerman. Easy come, easy go. 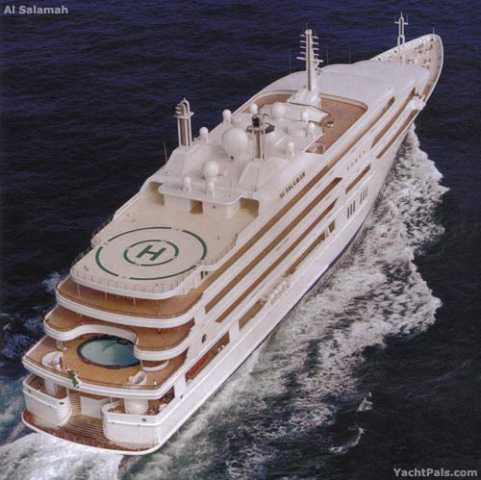 Middle Eastern royalty likes to bask in the pleasures of extravagant aquatic living. Al Salamah Saudi defense minister Prince Sultan bin Abdul Aziz owns this $200 million beaut. Her crew of 96 tends to 82 rooms, 8 decks, a glass roof-covered swimming pool, and a cinema. There’s more–rumor has it the ship contains a hospital–but verifying exactly what is aboard this secretive megayacht is almost impossible, unless you’re part of the Saudi royal family. 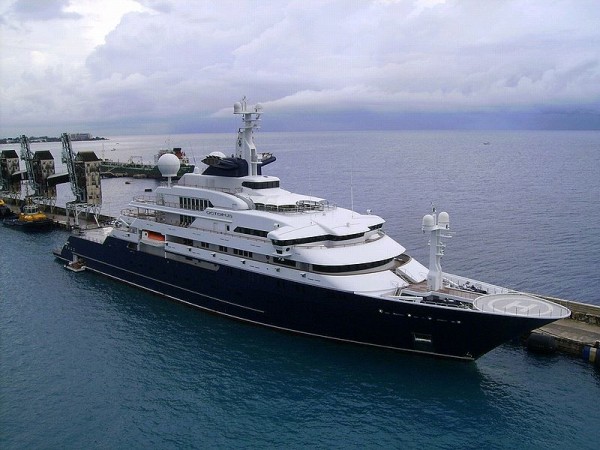 This is Microsoft co-founder Paul Allen’s 414-foot, $200 million ship. It features two helicopters, a pool, two submarines for undersea exploration (one is even remote controlled), and waterline hatches for several jet skis. Perhaps Allen is channeling the ship’s namesake for sheer number of extraneous distractions he can pack into it when the view gets boring.

While you will not find Sean Connery or Westley Snipes on board, you will find Oracle founder and CEO Larry Ellison and entertainment mogul David Geffen. The two gents co-own this extravagant $200 million mess which features onyx counter tops, a depressingly large quantity (3300 m2) of teak deck space, and, best of all, a basketball court that can double as a helipad in a pinch. Only aboard Rising Sun can you go from scoring a hook shot to soaring in a whirly. 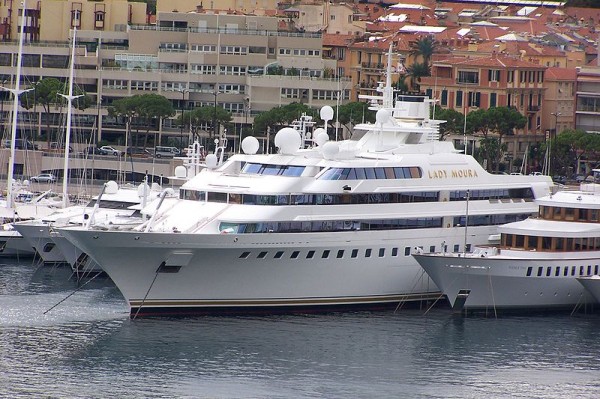 The Lady Moura continues the tradition of outlandish displays of Middle Eastern naval wealth and splendor. This $210 million yacht is the property of one Nasser al-Rashid, a Saudi Arabian engineering mogul and friend to the royal family. Arguably, the Lady is one of the most aesthetically pleasing ships, with her clever assortment of hydraulically powered hatches, ramps and doors that conceal everything and anything that might otherwise muck with the ship’s feng shui. In short, the yacht is a Transformer (1980s children’s toy turned cartoon series turned movie series in the 2000s) without the awesome battle scenes. 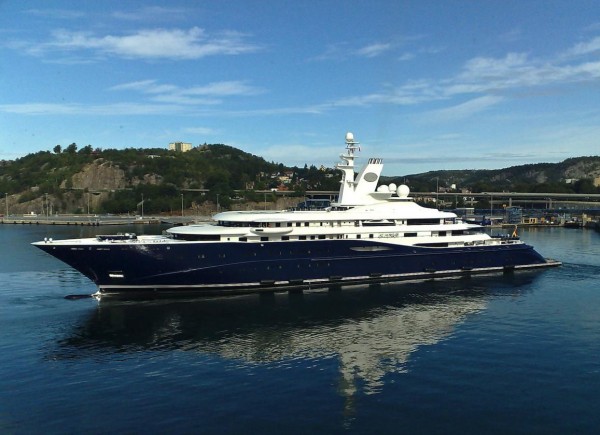 If you think Qatari Prime Minister Hamad bin Jassim bin Jaber Al Thani’s name is a mouthful, so is his ship. The Al Mirqab comes with the usual helicopter landing pad, elevator and movie theater, but also five large apartments, complete with their own living rooms. This beauty is valued between $250-$300 million. 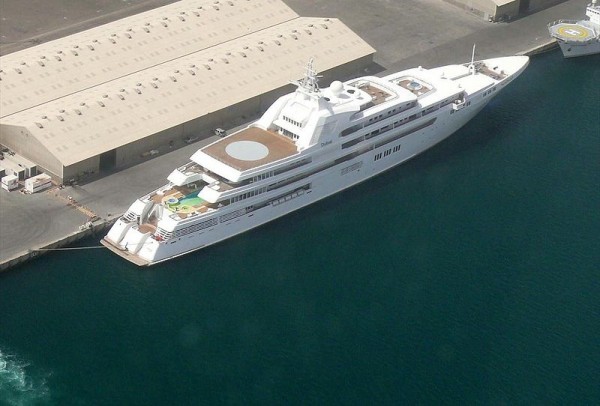 As outrageous as Abramovich’s Eclipse is, Dubai’s Sheikh Mohammed bin Rashid Al-Maktoum had to one-up him. His $300 million yacht, named for the luxury capital of the Middle East where he holds sway, just had to be bigger than the ship owned by the Russian oligarch. When the yacht was extended, the UAE-based shipbuilders were tossing around ideas like a “‘swimming deck’ on the stern at the water line and a ‘radar black box’ array in the bow. Predictably enough, the Dubai moors at a specially-built quay on an artificial island. 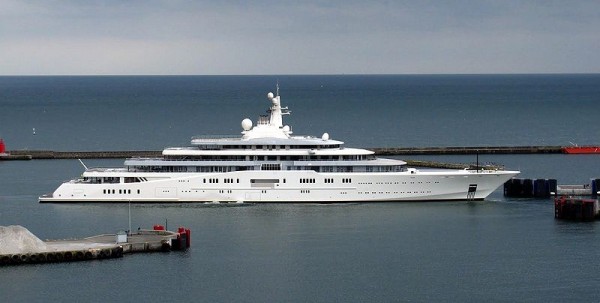 The $400 million Eclipse is not Russian billionaire Roman Abramovich’s first yacht, and it won’t be his last. It features a submarine (since even Russian oligarchs like to pretend they are Captain Nemo), multiple hot tubs, two pools–one of which converts to a sodden dance floor when drained–and, best of all, a missile defense system. Either he fears for his life, or he plans on shooting oversized skeet with it. It also boasts a so-called ‘electronic shield’ to stymie the paparazzi.

1. The Streets of Monaco 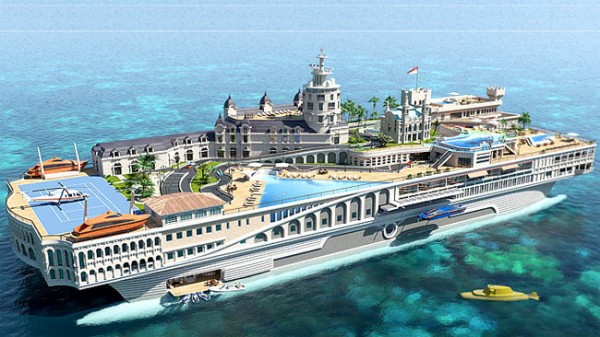 Less a ship and more a literal floating city, this ‘ship’ boasts recreations of various well-known venues found on the streets of Monte Carlo, including the casino, the Hotel de Paris and other landmarks. The $1 billion ship is for the “must do the most decadent thing since the history of decadent things” sort of tourist. Clearly, Monte Carlo, a city of delights and wonders galore just is not enough. This $1 billion bit of excess will do just that for a mere sixteen guests and seventy staff.