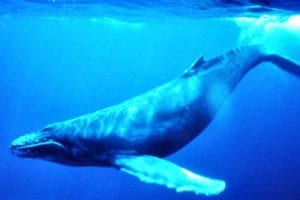 Walmart committed to cutting energy usage and reducing waste last year, but the retail giant has a long way to go before it can be called “green.” Taking dubiously-produced whale meat off the shelves would be another step in the right direction (from the New York Whale and Dolphin Action League):

Did you know retail giant Wal-Mart is also in the business of selling endangered whale meat? A Wal-Mart-owned Japanese-based supermarket, Seiyu, Ltd., offers the meat of whales hunted in violation of the International Whaling Commission under the self-appointed guise of “scientific whaling.”

Scientific whaling, which reports on the stomach and fecal contents of hundreds of the same species of whales (in the same waters, year after year,) is considered by non-whaling nations a ruse to market whale meat for purchase. Japanese whaling fleets still kill hundreds of dolphins and whales annually. Japanese officials have recommended that pregnant women and children avoid eating whale meat yet still permit this highly toxic product, the object of ongoing international protest, on its supermarket shelves. Seiyu is a major distributor of whale products and thus is instrumental in the ongoing illegal whaling and drive fishery slaughter.

On the shelves of Wal-Mart’s book section one finds books on the illegal trade in whale products and the struggle to stop commercial whaling in Japan. Yet the world’s largest retailer has done nothing to stop the sale of whale meat in its Japanese stores.