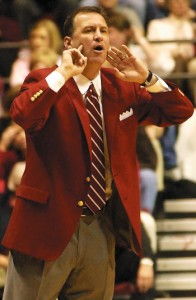 Traditional dogma says black or navy business dress is the best way to express a serious, dominant office persona. After reading this Spiegel article, I’m not so sure:

A recent study confirms previous reports that athletes wearing red uniforms win competitions more often than opponents dressed in other colors. According the report, published in the journal Nature in 2005, athletes dressed in red had a measurable advantage. An article published in the Journal of Sports Sciences in early 2008 determined that football teams wearing red had a disproportionately higher rate of both winning home games and securing the title than teams wearing either yellow or orange.

“From studies on animals and humans, we know that red is used to signal dominance,” [one of the study’s authors] told SPIEGEL ONLINE. “Among humans, rage is associated with reddening skin, which results from increased blood circulation,” the researchers wrote in their article for Nature.
A 2007 study published in the Journal of Experimental Psychology gave clear evidence that exposure to red “impairs performance” and can trigger an “avoidance motivation,” in much the same way as a stop sign.

Conclusion: Bosses, especially managers with lots of direct reports, should wear read. The alarming associations with this color will heighten employees’ anxiety to levels, inducing harder work. The boss should then avoid lingering in order to avoid impairing employees’ performance.

According to this MSNBC article,

Wear a chic all-black outfit to work, and don’t smile as often as you’re inclined. You’ll be seen as assertive and directed. Studies have found that people in black uniforms are viewed as more dominant figures, while the act of keeping a neutral face is associated with higher status and power in a work environment.

People in black are more dominant—until the person in the alarming red suit walks into the room.

What do you think would happen if you wore red to work?