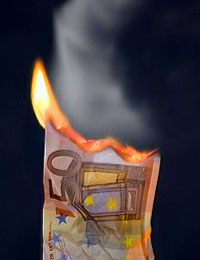 The euro hit a 4-year low today, making stock markets around the world dip. Clearly, the Eurozone crisis isn’t just limited to Athenians protesting and European Central Bankers scratching their heads. We gathered a set of links to describe how the European recession will affect the US, China, and other countries around the world.

Germany is the fourth biggest US trade partner; France is the second biggest. The US risks losing millions if these valuable trading partners won’t buy. (US Census)

Plunging into the red with fiscal policies led to Greece’s collapse. Is the US next? (Business Insider)

Investors are dumping euros and flocking to gold. Goldbugs are singing. (Seeking Alpha)

Another recession in Europe will increase social unrest there. It has already increased nationalism. (Wall St. Journal, Guardian)

The Eurozone may well shed some of its members or restructure itself. (Christian Science Monitor)

Maybe the Euro will even fall apart within the year. Or not. (Bloomberg)