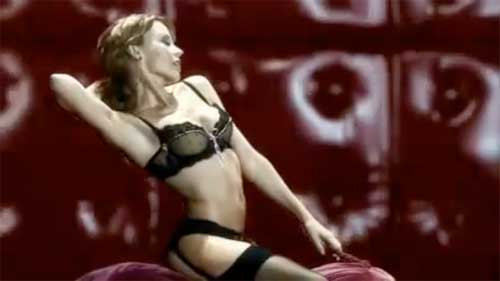 If there is one truth in advertising it must surely be this: sex sells. And a lot of sex sells a lot of things. As the late, great comedian Bill Hicks dryly noted, sex can be (and often is) used to advertise absolutely anything at all. Sometimes, however, those zany advertising types go a little too far for some peoples’ tastes, and wind up getting their creations banned. Here, then, are our top ten television commercials that were banned for their sexual content. Enjoy!

Let’s face it: computer operating systems aren’t the sexiest things in the world, but that didn’t stop Microsoft trying to change said perception with this commercial — and being slapped with a ban for their troubles. With the slogan “The Unexpected Experience,” the ad shows a guy having a spot of trouble with his partner’s bra, when technology takes over… If only it were as simple as knowing the password in real life…

Banned from daytime TV in the United Kingdom, this commercial, featuring soccer superstar Thierry Henry and burlesque performer Dita Von Teese, was a recent addition to Renault’s “Va Va Voom” campaign. There’s also a blink-and-you’ll-miss-it appearance from R ‘n’ B singer Rihanna. The ad, which features the corseted Von Teese seductively removing her bra and stockings, was deemed too raunchy for daytime audiences. Their loss, we reckon.

Ikea’s “Tidy Up” campaign caused quite a stir across Europe, and this ad was the most controversial of the lot. Focusing on the embarrassment of not having a tidy home, the commercial depicts a child’s alarming discovery. Original and funny, the ad is actually quite innocent, but anything involving minors and anything to do with sexual activity probably rang a few alarm bells with the censors. Subsequently it was banned in the UK.

Banned in the US in 2007 because of partial nudity and general sexiness, this commercial for Centrum is based on the idea that their products will keep you looking and feeling young. Featuring two very different sets of actors playing strip poker players, this naughty ad may have you reaching for the vitamins! As a bra is about to be removed, it’s revealed that all is not as it seems!

Hey, vegetables can be sexy too! This commercial was banned in the UK for the sexually suggestive content it contains, though you could argue it was the censors who had something other than dinner on their minds… This rude food takes the whole idea of sexy cooking to the extreme. Warning: you may have to simmer down after watching this.

Ever get the feeling you’re being watched? The couple in this cad don’t appear to suspect a thing! This ad for Budweiser Light gave a new meaning to the term “beer goggles” when it was shown during the Superbowl of 2007 and was swiftly banned in the US. The skinny dipping, partial nudity and sexually suggestive content were obviously just too much for some folks. Geez, talk about party poopers!

Taking the “sex sells” theory to the extreme, this notorious commercial shows a gold-digging hottie who is literally (though barely!) dressed to kill! Banned from American TV screens, the ad is about as hot as it gets. It depicts a recently married elderly gentleman’s death by heart attack as a result of watching his new wife seductive performance through a keyhole. And before anyone writes in, we’ve been assured that no elderly voyeuristic men were harmed in the making of the commercial.

This commercial was banned from British televisions for the simple reason that Australian pop star Kylie Minogue is just too damn sexy! The raunchy 2001 ad features the delightful Ms Minogue riding on a mechanical bull in translucent Agent Provocateur lingerie. As well as being seriously hot, the ad does have some artistic credentials as well: it was voted the best cinema advert of all time in a poll launched by advertising sales house Digital Cinema Media (DCM) in 2009.

By the very nature of the products they advertize, condom commercials regularly come under the scrutiny of the censors. This ad for Durex from their “Feeling is Everything” campaign was no exception. Featuring British actor Dominic Cooper, the funny commercial was deemed unsuitable for UK audiences when it was made a few years back. Still, we think you’ll agree the message, although a touch unsubtle, is an important one.

This arty ad for Calvin Klein’s fragrance “Secret Obsession” features another sexy celebrity, and was banned by US networks in 2008. The censors’ main problem was with sultry actress Eva Mendes’ exposed nipple. The makers re-cut the commercial, making it suitable for post 9pm audiences, and, in a great PR move, kept the original available for all online! Some might argue we can all be grateful for that!