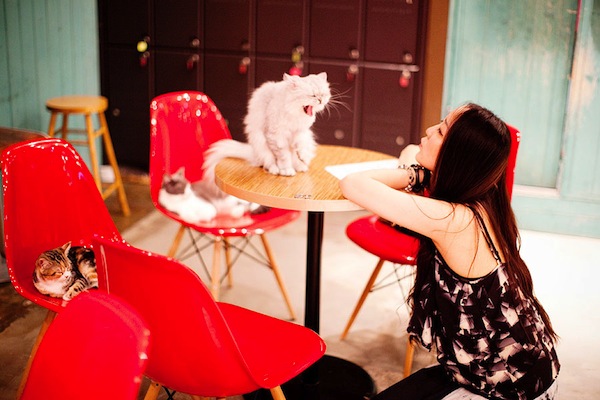 Imagine stepping into a local café, inhaling the rich aroma of brewing coffee, and taking a closer look at the menu. Alongside the house coffees, espressos and caramel macchiatos, however, there’s a rather more surprising addition: cats. Yes, you read that correctly, fuzzy felines are on the menu in cafés everywhere from Japan to Vienna. Don’t be alarmed, though – they’re not for eating. The animals are there to keep you company and help you relax.

Cat cafés are venues that offer patrons quality time with friendly cats while they (the clientele, not the cats) sip hot drinks and unwind. Thus, the cafés are sort of like supervised pet rental stores. This unique business idea originated in Taipei, Taiwan in 1998, while the first Japanese cat café was opened in Osaka in 2004. In a mere 15 years, the concept has exploded across Asia and has even begun to sink its claws into Europe. Read on for a closer look at 15 of the world’s most incredible cat cafés.