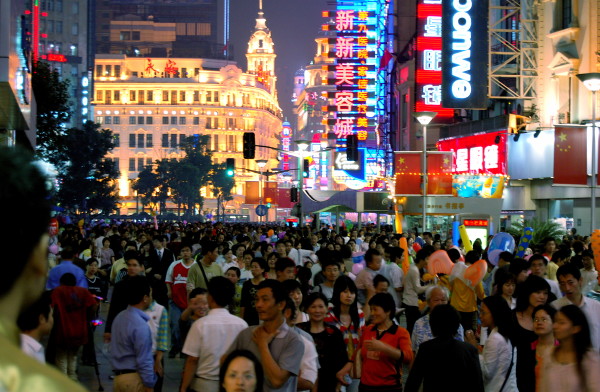 The Shanghai Composite was down again in Wednesday trading, closing 1.3 percent lower after a day of ups and downs.

That mirrored Tuesday’s yo-yo in markets worldwide as global fears continued to take their toll on investors. American markets were all down, with the Dow opening higher but falling 205 points at the close after swinging about 1,600 points over the course of the trading day.

The dip in Chinese stocks came a day after the country’s central bank announced its fifth interest rate cut in the past year. Trading in Shanghai took a sharp turn down early in the day before rallying, but still closed lower. About 43.5 percent of the Shanghai index’s multiyear high of 5,178.2, reached June 12, has now been erased.

Observers see Wednesday’s moves as a sign of more chaos to come. Business Insider’s David Scutt said “it would take a brave investor to suggest there will not be further losses to come.” And Li Kui-Wai, an economist at the City University of Hong Kong, questioned the Chinese government’s moves.

“Basically they just try to bail out everything,” he told the New York Times. “The market is unsure about what China can do or will do, other than interfering in it.”

But since Beijing’s interventions, which have included the rate cut as well as manipulating stock buying by state firms, have so far been ineffective in halting the sell-off, the turmoil in China’s markets is likely not over yet.

It’s important to remember that China’s stock markets are not entirely accurate bellwethers of the country’s economy, thanks to the fact of the government’s heavy hand in everyday life. But other indicators from China, including lower export and manufacturing numbers as well as a stagnant growth rate, have spooked investors worldwide. It doesn’t help that Beijing’s characteristic opaqueness is clouding the picture, making outsiders unsure of what exactly is the country’s economic reality or what officials will do.

That uncertainty has been compounded by worries over what the Federal Reserve will do when it meets next month. Interest rates have stood at zero since December 2008 but there is a good deal of unease over whether market sell-offs are just a needed “correction” of over-inflated stock prices or a sign of deeper economic troubles.