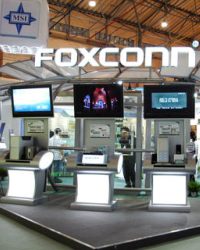 Foxconn, the world’s biggest contract electronics manufacturer, makes iPhones, iPads, Amazon Kindles, and Intel motherboards. Something about Foxconn, located in Shenzhen, China, also makes employees kill themselves. 19-year-old Li Hai jumped to his death today, the 10th employee to kill himself in 2010. The New York Times has the details:

Foxconn…has been struggling this year to explain a string of suicides among young workers at its huge complexes in the city of Shenzhen, where the company employs about 420,000 workers. Nine Foxconn employees have now committed suicide since late January in Shenzhen, and two others attempted suicide but survived with serious injuries, according to the police. While the suicide rate at Foxconn is still below estimates of the national rate of about 14 per 100,000 people in China, according to the World Health Organization, Foxconn executives say the figures are significantly higher than in previous years.

Sociologists say some of the Foxconn suicides may be copycat attempts committed by distraught youths who had learned of the earlier suicide attempts. Copycat suicides and so-called suicide clusters are common in most parts of the world, particularly in Asia, and health experts believe that news media reporting on suicides sometimes leads to such a contagion.

Some labor rights groups, though, have accused Foxconn of operating military-style factories and abusing workers. They also have called some of the deaths suspicious and have asked for an independent investigation.

Terry Gou, the founder of Foxconn and its parent company, the Hon Hai Precision Industry of Taiwan, told the China News Service on Monday that Foxconn is not a sweatshop and that the company was doing everything it can to prevent more suicides. Company executives say Foxconn is planning to hire psychiatrists, counselors and monks and even intends to bring in 2,000 singers, dancers and gym trainers to improve life on its two sprawling campuses in Shenzhen. China’s state-run news media also reported Tuesday that Foxconn is building tall fences at its dormitories to prevent workers from jumping to their deaths.

Foxconn might also try what Hyundai and Samsung have done before them: Have workers mimic their own deaths to stave off future suicide attempts.