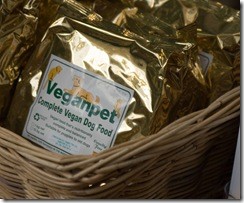 Forgive me, but I’m a little confused. Three times in the past week I have received coupons for premium, fresh ingredient based, holistic pet food! One brand comes shrink-wrapped in the deli case ala Jimmy Dean Sausage. Apparently dogs are now even going Vegan.

While gas prices are forcing me to make cuts in my personal and pet grocery bills, others are upgrading? I’m migrating further down the pet food aisle – away from the handy no-fuss-no-muss foil pouches of my dog’s coveted once-a-day wet food, toward the Old Roy bargain brand of mush. At the same time others (a lot of them) are treating their doggies to the highest quality meat meals, grains, and fats and oils available? I’m going on record here to say – I really don’t love my dog that much. Kids, yes. Dog, no.

Your Pet Can Should Eat Better Than You

EaglePack claims to offer at least 8 custom supplements. At least. All this along with hypoallergenic formulas (since when are dogs allergic to their food?) and exotic ingredients like duck and quinoa. Canidae boasts a higher protein content, and even Paul Newman is getting in on the recent trend for high end pet food.

Natural pet food sales were estimated at $375 Million in 2004, and soaring. Now factor in holistic pet health products (2009 sales figures are predicted to be double that of those for 2004) and alternative litter sales (expected to climb to $255 million by the end of 2009) as well as botanical-based pest control shampoos, aromatherapy for your pet, specially targeted health enhancements, and even Spa Products for the pooch! The three main categories alone are said to hit a billion a year by 2009.

But Why? And How?

Aren’t we all tightening our belts a bit and cutting back to basics? I can’t help but think of the stereotype of the poverty stricken old man cracking open a can of Alpo for supper.

Why the big dollars on pet food? According to pet retail experts, market drivers include the following:

The last one gets me. Favorable human demographics. What does that mean? It’s defined further as suburban/rural to metro shifts, aging populations, declining household size/number of children, postponement of marriage, and growth in dual-worker households. So basically, a bunch of twenty- and thirty-somethings are now more likely to choose a pair of Cockapoodles over a little Courtney and Cole.

It could be good news. Astute investors may be able to cash in on the insanity.

Plus, premium dog food is still slightly less expensive than standard people fare. If times continue to get worse, it might not be so bad if we actually have to eat our pet’s food.