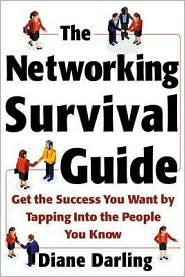 I have a problem. I’m an introvert. I’m not shy. I’m not afraid of being in public. But I am horrible at chit-chat and gossip. If I spend an evening at a social function with people I don’t know or don’t like, I get home and feel like I’ve spent all day at the ocean. It’s that fighting-the-waves and drained-by-the-sun kind of tired. I would rather spend four hours with my head stapled to the carpet. I would be more comfortable that way.

In engineering school, I was fine. Engineering classes aren’t particularly interactive, and in study groups, we only spoke when needed. In business school… well that was tough. I tried to sit in the back most of the time so as not to participate. But it was a mistake not to go to all the social functions. There are probably people from my classes in high places now, and they won’t remember me and I don’t know what they do.

For better or for worse, connections make the world go round. Just this week I was reading about the importance of networks in the VC industry. It applies to all of business though. Knowing lots of people reduces your headaches by a factor of 10 when you need to get something done. Requests from strangers don’t get filled as quickly as requests from acquaintances or friends. If you don’t network, you find yourself in situations (particularly as an entrepreneur or business owner) where you need someone with a certain skill set and you don’t even know where to start looking. Then you have to advertise a position or opportunity, and weed through the applicants to find the 5% that are actually worth talking to.

Over the last 7 years I’ve made a lot of progress. Here’s what I’ve learned about networking as an introvert.

Networking is an investment, not a nuisance.
Imagine if you could always find what you needed in just 1 or 2 phone calls. If you are well networked, you probably can. By putting in the time to build your network, you save time when you need to get things done. Well networked people don’t have to waste time firing off random emails to people they don’t know, buying leads or industry lists, or hunting through hundreds of resumes for the right candidate. Pick your poison. Do you want to put in the time now, or later?

At first, you have to kiss a lot of frogs.
Sometimes you have to start by picking events at random. You spend an hour in a very uncomfortable setting, but you learn what to go to and what to skip. Eventually you find a few people or events that you like.

Don’t spend too much time on it.
If you wear yourself out, you won’t ever want to do it. Accept your limitations and just do 1 or 2 events a month. It takes a long time to build these relationships, so it’s better to stick with a few groups over the long haul than 10 groups for two months.

Do cool things.
Introverts typically don’t like to talk about themselves – we prefer to talk about ideas. Force yourself to discuss some of the things you’ve done. Don’t brag, make sure they are relevant to the conversation. Then the extroverts can talk about you and pass your achievements along. It gives you credibility in some circles. Yes, I realize you would rather be accepted for what you think and know, but the truth is that the world measures you by what you do.

Invite people to lunch.
Or invite them to coffee or for a beer after work. If you meet a fellow introvert, he/she is unlikely to do the inviting, so you have to do it.

Go regularly to things you like.
When I was living on the Space Coast, I went to a group called Founders Forum. It was for entrepreneurs and investors. I learned a lot at the meetings, but it took about 6 months for people to start recognizing me and saying hi. It was uncomfortable, being 23 in a room of mostly middle aged people. You just have to keep showing up, month after month.

Analyze your results.
Introverts are intuitive and analytical. Use that skill. What is working? What isn’t? Where do you get the most bang for your buck?

Find the key nodes in the network.
Don’t find a marketing person, find someone who knows lots of marketing people and then invite that person to lunch. If networking wears you out, you will be better off finding the ten key people who all know lots of other people, than finding and maintaining fifty relationships. This takes a long time because it is hard to find the right person. Look for introverts that, for whatever reason, are in jobs that force them to be well connected. Extroverts that share one of your core passions are also a good match.

Don’t network just for the sake of networking.
There is a book called “Never Eat Alone”. That’s all fine and good for extroverts, but we introverts can’t network just to network. As you meet more people, focus on spending your time with the ones that are the best fit, and focus less on meeting new people.

The hardest part for me was the first few events. I sometimes feel like I don’t know what to say when I meet new people. I would be soooo much more comfortable if someone started a conversation by asking me what I thought of utilitarianism as a way to make ethical decisions, or whether Sarbanes-Oxley has encouraged companies to list on other exchanges. Ideas usually seem so much more interesting than people. But, by sticking it out, month after month, I’ve slowly learned some good things to say, and grown more comfortable meeting strangers. So trust me when I say it gets easier.

The majority gets to set the rules, and the majority of people are extroverts (70% I think). Networking is an important key to unlocking your own potential. So play by the rules of the game the best that you can, or don’t sit and complain when you have a great idea and no one to help you launch it. I hope you can learn from my experiences, so that you don’t waste as much time as I did fighting the inevitable.