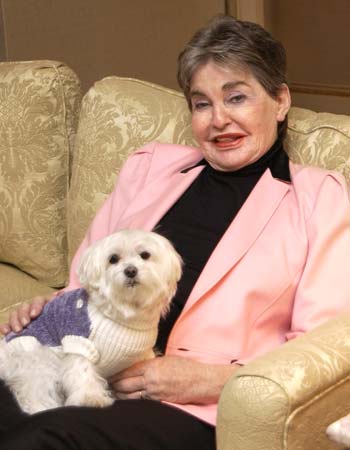 In case you haven’t seen it yet, here’s the most notorious inheritance move made by a mogul in years:

Hotelier and real estate magnate Leona Helmsley left $12 million in her will to her dog, Trouble…(a move that) led to death threats against the dog, which now requires security costing $100,000 a year. But that…is nothing much compared with what other dogs may receive from the charitable trust of Mrs. Helmsley, who died last August.

Her instructions, specified in a two-page “mission statement,” are that the entire trust, valued at $5 billion to $8 billion and amounting to virtually all her estate, be used for the care and welfare of dogs.

The trust will be worth almost 10 times the combined assets of all 7,381 animal-related nonprofit groups reporting to the Internal Revenue Service in 2005.

Mrs. Helmsley, the widow of Harry B. Helmsley, who built a real estate empire in Manhattan, was best known for her sharp tongue and impatience with humanity.

The woman hated people. The problem, however, is that educating people–not dogs–would be the biggest boon to national canine welfare that I can think of.

If all the money goes straight to dogs, wonderful: more shelter space, behavioral specialists, and vet care will keep our dog population healthy and away from the euthanasia needle. The money could also train more specialist dogs, such guide dogs and pets trained to visit hospitals and other facilities where they’ll be medicinal to humans. The article also stated canine health research and funding the Society for the Prevention of Cruelty to animals would be good causes.

To all this, I say Yes! Do it! But $8 billion (!) dollars is enough to address the fundamental problem this country has with dogs, which is one of mismanagement. I moonlight as a dogsitter, and I see it all the time. A woman buys a big, energetic dog, then keeps him in a kennel all day while she’s at work. A couple buys a beautiful Weimeraner puppy, but never trains her, leading both the couple and the dog in a constant state of stress. A rich woman gets two small, hyper dogs, but her darlings are too precious to ever be taken outside on walks.

If you want to get a dog, give him or her a good life. If you can’t guarantee that, don’t get the pet in the first place.

Here’s how Helmsley’s money could be put to good use:

1) Conduct a thorough survey of all people depositing their dogs at humane societies around the country. What was the main reason for bringing the dog here? Bad behavior? Too much to handle? Too sick? Ran away too many times? Not what the owner expected?

2) Once survey results have been tabulated, figure out the most prevalent reasons for people abandoning their canines. Launch education and ad campaigns to address those reasons. Build a brand around treating dogs well. For example, a big image of a Golden Retriever and a simple motto, like “Make Him Deserve You,” would work. Run “Make Him Deserve You” TV ads of the same quality and frequency as, say, the current anti-marijuana ads. Put up billboards. Build a slick Internet portal around the campaign, with numerous petcare resources and tips. Sell space on the portal for dog trainers, obedience schools, and other private institutions dealing with dogs.

3) Create a mandatory adoption class for each new pet owner.

4) Build more detailed regulation around puppy mills and other forms of dog mistreatment.

5) Give companies, hotels and other human establishments incentives to allow well-behaved dogs. I loved having dogs at my corporate jobs, most of which have allowed them (these were Internet and publishing companies). Discretion, of course, would be encouraged.