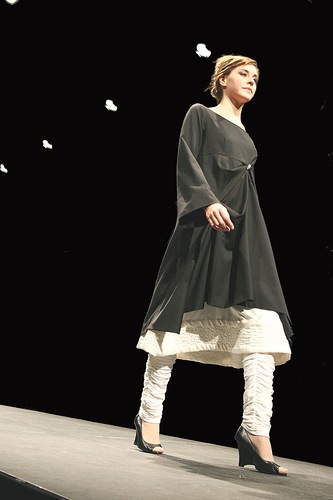 In case vamping up the wardrobe is one of your your new year’s resolutions, I thought you may like to know about a little friend of mine called Recession Chic. (As opposed to the drearier Depression Chic). In short, less is more. The pitiful economy has fashion in a downward spin of less money, less color, less bling, less designer labels. But less fun? I don’t think so!

Last spring Time magazine ran a piece on the history of economic downturns and fashion. They cite the contrasts between 1920s flapper hemlines and the ankle skimming lines of the 1930s. The mini-skirts of the 1960s were followed by the long hippie looks of the 1970s. But our current fashion down-trend wasn’t really-really-real until Wordspy defined Recession Chic as ‘style and elegance on a tight budget’ in October.

Since fall we’ve seen a darker palette and starker silhouette with a sharp edge. Designers are working in severe black cocktail dresses and structured suits. Even black bowl-cut wigs and black lipstick hit the runway.

Christian Lacroix calls the shift in sensibility a ‘new minimalism’ and says the color black is like a mask of protection against recession. Huh?

Fashion For the Rest of Us

Come on people, it’s pretty simple isn’t it? I just bought a fabulous skirt and a pair of slacks at a going out of business sale. Guess what? Both black! Why? If you’re going to spend money on quality clothes, you need to get a great return. Black is practical. (Not to mention slimming. It is post-holiday after all.)

SEE ALSO:
A Look at the Gift That Inspired Creativity

“Black is always the color people rely on most often in tough times, especially if they’re going to spend on big-ticket items.”

Duh. This is why only rich people prance around town in white pants.

Enter the recessionista, that frugal fashionista who’s not afraid to troll the clearance racks. In October the New York Times reported that PR pros everywhere are pushing moderately priced makeup, salon services, and clothing lines. All they had to do was add the suffix ‘chic’. Lexicographer Barrett, a lexicographer who specializes in new words and slang, said the word is just being used to give Americans an excuse to buy more stuff.

Derek Blasberg on style.com writes that fashion conscious women are finding designer threads and knockoffs at discount prices. They’re shopping at Target, Uniqlo, Payless, and Kohl’s. Most of all they “aren’t letting a little thing like falling stock prices and rising gas bills get in the way of their wardrobe.”

Even designers serving the inauguration crowd are having a tough time creating dresses that are both “one-of-a-kind” and “recession chic.”

Meanwhile, I’m trying to look cute via Wal-Mart. Anyone feel like joining me on a Salvation Army run? Oh wait… I have those black slacks. If only I could afford to get them hemmed!