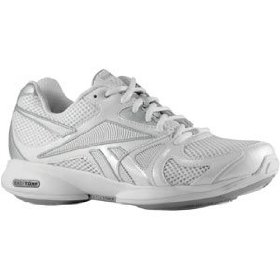 Reebok–remember that brand?–recently came out with its new EasyTone sneakers. These women’s shoes are built to tone and firm your bottom while you walk. WalletPop has a good analysis of what’s behind the butt-firming EasyTone:

Reebok’s site explains that “DMX technology” and “balance pods” are the key. “Air travels between the forefoot and heel pod, creating super soft cushioning. The moving air creates a natural instability and forces your muscles to adapt to the air volume within the pods.”

Okay, here’s what I think they’re saying: The reason these sneakers give you a better workout is because they throw you off-balance and make it more difficult to walk in them.

(Reebok also claims that) “due to the instability of the balance pods, activities with unplanned side-to-side movement and/or any lateral-movement-sports such as tennis or basketball-should be avoided.”

Okay, so they work, as long as you don’t really exercise. This sounds like yet another fad shortcut to losing weight while expending little extra effort.

The idea that shoes can help tone you is in fact gaining traction among footwear manufacturers. The Wall Street Journal has more on the physiology behind “physiological footwear”:

Unlike traditional athletic shoes that are built to be stable, rocker-sole shoes are deliberately unstable. The effect, companies that make the shoes say, is similar to using a wobble board or balance board in a gym. To stand or walk in these shoes, you must engage more muscles than you do using regular shoes, the companies say. Manufacturers recommend you wear them during your normal activities, starting with short periods until you get used to them.

Reebok commissioned a study from the University of Delaware, which tested five women on a treadmill with electronic sensors on their muscles. Electrical activity in the butt muscles—representing muscle movement—was 28% greater for the EasyTone shoes than for a typical Reebok walking shoe used as a control. Electrical activity was 11% greater for the hamstring and calf muscles while wearing the EasyTones.

The test involved only 500 steps, and Reebok acknowledges that the effect may diminish as wearers get used to the shoes.

Studies done on the Masai, the first physiological shoe to hit markets, show that physical therapy patients given Masai shoes for three months recovered faster than their non-Masai-wearing counterparts. The shoes strengthened the small muscles around the ankles, and their weight helped wearers burn more calories, according to the WSJ article.

Reebok’s EasyTone shoes, on the other hand, are lighter. They also have only one study supporting that they strengthen muscles.

Reebok EasyTones, as well as the other physiological shoes on the market, strike me as yet another something-for-nothing fitness fad. By simply wearing the shoes, you firm up your glutes. I see this eventually going the direction of fads like the Atkins Diet and ankle weights (remember those?). Physiological footwear may have a permanent place in a niche market, but it’s not going to revolutionize female American butts. Only squats, lunges, and fewer donuts will accomplish that.