This is a guest post by Steadfast Finances‘ Matt. 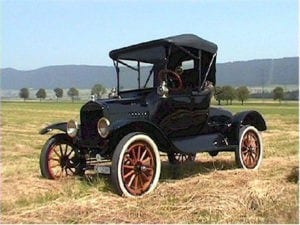 The U.S. Government just handed out 700 Billion Dollars bailing out Wall Street, and now the major U.S. automakers are headed to Washington hat in hand asking for the same treatment.

Because they’re too large, too inefficient, and have essentially gotten their collective butts kicked by foreign automakers since the 1980s.

Anyone who lived through the 80s was introduced to the frightening concept that a foreign country – in this case Japan – was gaining a strong economic foothold on our soil by out-competing our nation’s leading automakers. We also awoke to the very real concept that our vehicles were not considered the gold standard as we had been led to believe.

How did foreign automakers find such success? The experts would likely debate the specifics, but the Cliff Notes answer would be:

Now, fast forward to the current economic crisis and ponder this question: Did the Big Three learn their lesson from history’s past?

Apparently not, considering the size of the hole they have dug for themselves.

With the current downturn in the U.S. economy, and the subsequent tightening of the credit markets, the Big Three automakers once again find themselves in a quagmire. But this time, they’re not looking to beat the competition by redesigning a classic American muscle car or run a nationwide clearance sale using zero percent financing incentives.

This time, they are fighting for their very existence, or at the very least, to stave off bankruptcy.
Regardless of whether we the taxpayers feel the automakers should go bankrupt or not, we should begin to consider the potential fallout of letting them go bankrupt, or worse, permanently out of business.

The Trickle Down Effects of U.S. Automakers going out of business

1. The Big Three shut down manufacturing plants. Hundreds of thousands of Big Three auto workers will potentially lose their jobs. Not just blue collar jobs, but white collar office workers as well. This includes everything from main line assembly workers, accountants, finance experts, and goes all the way to the lowly janitor.

3. Reduced need for auto financing. Fewer people can buy new cars due to tightening credit market. Auto financing, from auto specific lenders like GMAC or even the friendly neighborhood bank, see reduced profits from the lower volume of new car loans being written.

5. Local businesses dependent upon auto industry related income also decline. Businesses that sprang up around the manufacturing plants will see business decline due to fewer paying customers, and could potentially go out of business themselves.

6. Cities and towns see devaluation in local real estate market. With an increase in foreclosures, and more homes on the market than people are willing to buy, the law of supply and demand drive home prices lower with each passing month.

7. Local and state governments begin see lower tax revenues. Income and property taxes are the lifeblood of any local government’s tax revenues, so as the two largest forms of incomes begin to dwindle, preplanned budgets begin to see dramatic scale backs in funding.

All this may sound like “doom & gloom” rhetoric, but the early warning signs are now becoming visible. The Bush administration has supposedly rebuffed General Motors and Chrysler in their attempts for a government funded merger, and auto parts supplier ArvinMeritor recently cut 7% of its workforce due to “difficult market conditions”.

Even state governors have gotten into the act by proactively lobbying Hank Paulson and Ben Bernanke specifically to take “immediate action” to ease the potential shockwave of massive job losses. Not surprisingly, state governments see the potential writing on the wall, and are taking as much of an active role as the current situation allows.

The jury is still out regarding the future of the Big Three automakers, but it will certainly be watched with much anticipation by the top echelon of big business, and perhaps more importantly, by the American taxpayer.

Matt, a full-time, independent trader, has been an active investor since 1998. He started Steadfast Finances after spending a substantial amount of time discussing financial advice with family and friends, who basically didn’t know all that much about investing.

His goal is to educate those who want to know how to grow their money beyond a money market account or buying an index fund can provide, while throwing in a few personal finance tips along the way.