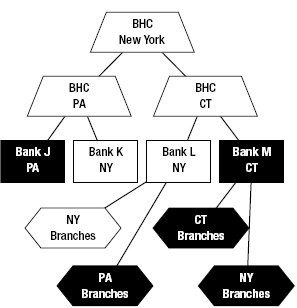 Last week, there was still a Wall Street. This week, there are a bunch of holding companies.

The Federal Reserve, in an attempt to prevent the crisis on Wall Street from infecting its two premier institutions, took the extraordinary measure on Sunday night of agreeing to convert investment banks Morgan Stanley and Goldman Sachs Group Inc. into traditional bank holding companies.

In return for access to the Fed’s emergency lending facilities, the firms would need to subject themselves to more oversight. The step could have far reaching effects on their profitability and their business models.

With the move, Wall Street as it has long been known — a coterie of independent brokerage firms that buy and sell securities, advise clients and are less regulated than old-fashioned banks — will cease to exist.

Becoming a bank holding company makes it easier for the firm to raise capital than if it remained a traditional bank. It can assume debt of shareholders on a tax free basis, borrow money, acquire other banks and non-bank entities more easily, and issue stock with greater ease. It also has a greater legal authority to repurchase its own stock once issued.

In return, bank holding companies agree to increased regulation and examination by not only the SEC, but several other branches of the government. Their ability to take risks will be vastly diminished, and they’ll be required to hold more capital on reserve.

As holding companies, Morgan Stanley and Goldman Sachs will increase their retail units in order to make money off customer deposits. CNN says that “the companies…hope the shift will end investors’ fears that the investment banks are not solid enough to survive.”

Ahem. Note to companies: You’re not investment banks anymore. Note to government: Bank customers are also taxpayers. With $700 billion to cover in upcoming years, customers won’t have much to deposit.