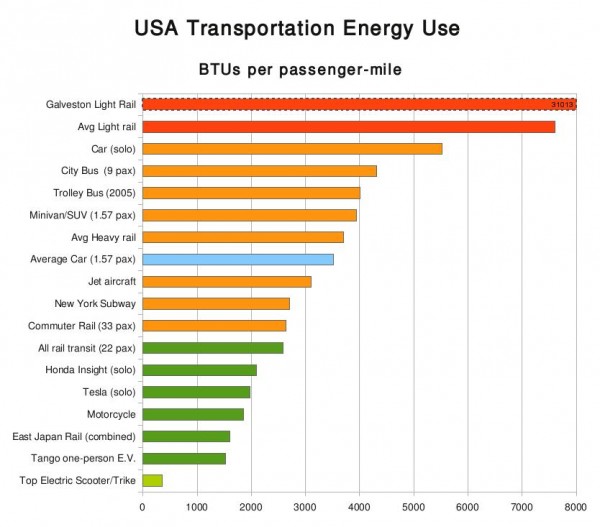 I want to like trains. I like riding them, both here and abroad. You can get work done while sitting on the train; you don’t have to worry about traffic jams or bad driver behavior, let alone parking. They’re good for the environment and make life easier on everyone, right?

Not so much. With Obama’s exaltation of the transport, I decided to research the costs and benefits of high-speed rail in more detail. As it turns out, they’re not that green, not that efficient, and, in many ways, not that great. Here’s a breakdown of what I found.

More jobs, fewer cars, and economic stimulus around train stations. Those are the selling points of a high-speed or commuter rail system. Here’s the lowdown on rail’s pleasant benefits:

• Building and maintaining railways will create thousands of jobs. This government job stimulus program could provide much-needed employment across the country.

• Rail infrastructure ideally stimulates both walkability and economic growth in a city. The logic goes that businesses and restaurants will burgeon in areas frequented by rail riders. In my own neighborhood, there’s a light rail project underway that would enliven the whole area. We expect development to follow the installation of the rail, especially given the number of commuters and students that would probably use it, avoiding traffic in the process. The rail infrastructure, in other words, would add value to our neighborhood.

• As urbanization increases, trains will make more sense. One counter-argument to trains is that the population in America simply isn’t dense enough to make them viable. But more and more people are moving to cities. From this USA Today article:

“Right now, there are about 6 million households that live within half a mile of stations,” says Shelley Poticha, president of Reconnecting America. “The demand for housing near transit is going to grow to over 16 million. That’s a big number.”

• A high-speed train can improve peoples’ quality of life. A bullet train from, say, San Francisco to San Diego would mean wonders for commuters, college students, families, and anyone else who doesn’t want to deal with the airport while still making it to their destination quickly (San Francisco to LA would take an estimated 2.5 hours on a high-speed train).

• As long as the rail systems are priced right, people will have less incentive to drag their cars onto the road. The number of drivers will go down, ideally mitigating traffic jams. ($5/gallon gas could also boost rail ridership.)

Efficiency can be improved. The US freight train system proves as much. We have the best freight train system in the world, according to Coyote Blog’s Warren Meyer. The system is “green” and efficient. But you can’t easily share freight rails with commuter rails, he says, compounding the work it takes to prop up a commuter train.

But if we’re going to put years of blood and sweat into making commuter trains more efficient, we have to pay for it. And that’s not factoring in the estimated cost of $132 million a mile (on the high end) of building and running the inefficient ones. It brings us back to the question that everyone in America is asking almost every day: “Where’s the money going to come from?”

A high-speed train looks good on paper, but is much more expensive and complicated in execution. Jumbled zoning ordinances, for example, would make a San Francisco-LA rail line incredibly complicated to construct, according to a MasterPlanning article.

Where there is red tape, there is pork, and the government’s $900 billion California high-speed rail plan is one piece of proof. Warren Meyer again:

Rather than focusing either on LA or SF, Congress apparently appropriated the money for a mostly rural district that just coincidentally had a Democratic Congressman embroiled in a difficult election. So now Congress has dedicated a billion dollars of your money for (a) high speed rail line…from Borden to Corcoran. (There is also) the practice of building even one useless section as a way to commit the public to building the whole thing.

And to pad corporate pockets (GE, anyone?), and those of unions, and anyone else who happens to be lobbying the cause. If rail’s execution were smooth and practical, the painful costs associated with http://economix.blogs.nytimes.com/2009/08/04/running-the-numbers-on-high-speed-trains/ might seem more palatable. But real life doesn’t reflect that.

How About a Smart Transportation Grid?

In some places, high-speed rail makes a lot of economic and environmental sense. The city is walkable, or riders can transfer to a light rail and not worry about parking fees or transportation to their final destinations. In other places, it doesn’t make much sense at all. Other forms of transportation, like buses, which are much more energy- and cost-efficient than trains, might make more sense there.

There’s a lot of talk about the smart energy grid. What about smart transportation? Instead of pursuing blanket assumptions about the benefits of high-speed rail across America, the Obama administration would do well to figure out where such systems make sense and where they don’t. It would also help to make building and maintaining them more efficient, and less red-tape intensive. But perhaps those suggestions are as idealistic as the idea that high-speed rail is always a good idea.