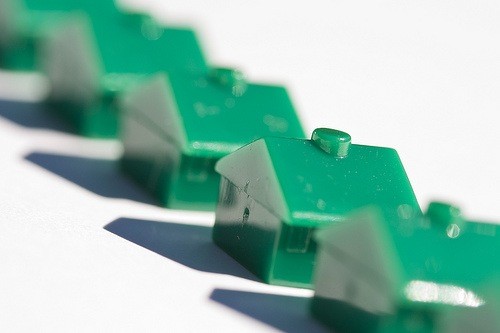 Mine won’t be one of the three million mortgages expected to get a new deal via The Bailout.

A little over five years ago my husband was transferred to a new city. We traveled to the new location to find a house, found a nice place in a good neighborhood with bedrooms for each kid, and took the best mortgage deal we could get.

Because we expected to be transferred again within a few years, we decided on an adjustable rate mortgage. The rate was SO much lower. That’s not to say that we couldn’t afford the house we bought, that we wouldn’t have bought the same house even with a higher rate and payment. But if you have the choice, who’s going to choose a higher rate? Although five years in the same city seemed unthinkable, we went for the seven year adjustable option – just to be safe.

The Party’s Over: Refinancing

At the five year mark, it became clear that we weren’t going anywhere soon so I started shopping for a new mortgage. With over 18 months to go on the ARM, we refinanced into a fixed mortgage at a significantly higher rate. But that was okay because we had the peace of mind of knowing our payment would remain consistent. Not to mention, as my mortgage broker pointed out, we had enjoyed that tremendous deal for over five years. It was true. We’d saved a bundle with the lower rate. We felt lucky, once again, to have the right numbers on our credit report. AND a month later when every headline had to do with rates and mortgages, we felt we’d dodged a bullet.

But now the Treasury and the Federal Deposit Insurance Corp. are planning to ‘guarantee’ troubled mortgages by requiring lenders to restructure mortgages based on a borrower’s ability to repay. And they’re going to do it by lowering the interest rates. Don’t get me wrong, I’m all for keeping people in their homes, I just don’t think I as a taxpayer should pay for it. Who should?

Hmmm…. how about the banks who made all the money on the mortgages? I took a gamble, getting a sweet deal on my mortgage under the assumption I’d be out of it before the rate climate changed. The banks took a gamble making crazy money off of imaginary appreciation in assets that turned out not to actually appreciate. The difference is that now I have to suck it up and pay a higher payment while the banks still get to protect their profits. So just to recap, I’m paying for my gamble AND my taxes are paying for the banking industry’s gamble.

How about they just lower all the rates across the board? Yeah, I know. It’ll never work. The simplest things never do. But a girl can dream, can’t she?

This part of the bailout program is supposed to benefit ‘Main Street’, but it sounds like more money for the faceless bankers to me. What do you think?