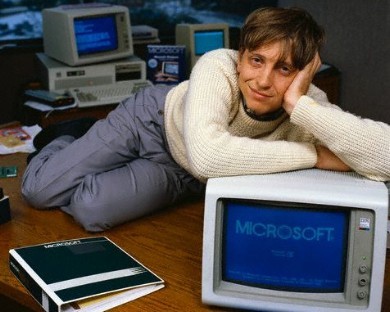 Farewell, Bill Gates. Your 25 years at Microsoft have nurtured it from obscurity into a megalith. Now, it’s something in between.

One thing is certain. Microsoft was built around the figurehead of Bill Gates. This Friday, Gates is bidding farewell, depriving Microsoft of its key symbolic element: himself. He’ll stay as a chairman, hovering in the periphery, trying to stop bad deals in the making (Yahoo, anyone?). But Gates-free Microsoft just won’t wield the might it used to.

According to an article in today’s India Times,

Gates’s bespectacled nerdish visage is an integral part of Microsoft’s image and his departure is symbolic, according to analysts. “The challenge Microsoft has when the founder departs is remembering its heart,” said analyst Rob Enderle of the Enderle Group in Silicon Valley. “At some point the firm has to take the essence of what made Bill Gates successful and make sure that is preserved. Whether it is a company or a person, once you’ve lost your heart there isn’t much left but a shell.”

After founding Microsoft in 1975, Gates claims to have put in steady ten-hour days at work. Now he’ll focus his workaholism on the Bill and Melinda Gates Foundation, which assists developing nations with health and education concerns. The foundations boasted about $44.7 million net assets in 2007.

SEE ALSO:
Best Books for Anyone Starting a Business

Meanwhile, Microsoft continues to flounder. Desktop software, formerly the company’s key strength, has become a weakness. The Vista operating system is a flop with customers (for good reason, I might add). Macs, meanwhile, now comprise more than 5% of the world’s computers. Google’s free online programs make MS Office less essential than it used to be. Most recently, Microsoft failed in its recent bid to take over Yahoo.

“Microsoft has to leverage its strengths; right now it is thrashing a bit,” Enderle said. “The company is on its own. The training wheels are off. It needs a way to point itself in the right direction and peddle like hell. You could see Microsoft struggling after Bill Gates stepped out of day-to-day roles.”

“A founder takes such a larger-than-life role and directs a company in very subtle ways that are often forgotten when a founder leaves. That gap, for a lot of companies, has been almost terminal.”

What’s next for the company? Its strengths remain relegated to servers and tools. (The Xbox hasn’t yet made a profit.) Back in March, Time Magazine interview with Gates indicated that he was optimistic, but his ideas all sounded familiar.

The real question remains: what will Microsoft without Gates look like?

Will it ever be scary again?