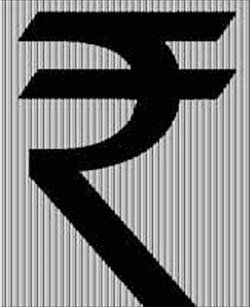 India’s currency, the rupee, now has its own symbol, thanks to Indian Institute of Technology post-grad D Udaya Kumar, whose design was chosen in a national contest. Kumar will get an award of Rs 250,000, nearly $5,400–and India will get a new currency symbol. The Times of India has more:

The Indian rupee will soon have a unique symbol — a blend of the Devanagri ‘Ra’ and Roman ‘R’ — joining elite currencies like the US dollar, euro, British pound and Japanese yen in having a distinct identity.

“It’s a big statement on the Indian currency… The symbol would lend a distinctive character and identity to the currency and further highlight the strength and global face of the Indian economy,” Information and Broadcasting Minister Ambika Soni told reporters after the cabinet meeting.

Though the symbol will not be printed or embossed on currency notes or coins, it would be included in the ‘Unicode Standard’ and major scripts of the world to ensure that it is easily displayed and printed in the electronic and print media. The symbol will be adopted in a span of six months in the country, and within 18 to 24 months globally, Soni said, adding that it will feature on computer keyboards and softwares for worldwide use.

Soni said that the symbol, which reflects the Indian ethos and culture, would help distinguish the currency from the rupee or rupiah of other countries like Pakistan, Nepal, Sri Lanka and Indonesia.

For India, the next step after government approval is submission to the Unicode Consortium, a not-for-profit organization of many of the world’s largest software manufacturers, which has created standard computer coding to represent many of the world’s languages. An Indian technology trade organization, Nasscom, will ask software developers to include the symbol in their new products, and Indian keyboard manufacturers will be encouraged to include it new products.

Currency symbols are supposed to reflect status and economic strength. But when you think about the Kazakhstani tenge and the Nigerian naira, which both have their own symbols, that doesn’t quite hold up. I think a currency symbol has more of a nationalistic function in practice. It’s a way to unite a country and make its citizens proud.