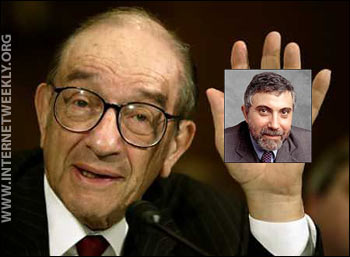 Paul Krugman, a professor at Princeton University and an Op-Ed columnist for The New York Times, was awarded the Nobel Memorial Prize in Economic Sciences on Monday.

Mr. Krugman received the award for his work on international trade and economic geography. In particular, the prize committee lauded his work for “having shown the effects of economies of scale on trade patterns and on the location of economic activity.” He has developed models that explain observed patterns of trade between countries, as well as what goods are produced where and why.

Mr. Krugman’s theories have explained why worldwide trade is dominated by a few countries that are similar to each other, and why some countries might import the same kinds of goods that it exports.

I’m not very familiar with the international trade theories that won Krugman his prize. I do, however, often read his columns. Here are some Krugman points from his blog and recent columns:

-Great Britain did the bailout thing far better than we do.

-We need to fix the financial crisis now (yes, even after the bailout plan), otherwise things can and will get even worse.

-Healthcare is still a big issue. It must stay regulated.

-Our leaders are weak and confused.

Krugman has been vaunted and criticized in the past for his opinion columns. But you can’t argue with some of the points he brings up today, nor with the fact that he has made the financial crisis and the field of economics itself much more comprehensible to regular Josephines and Joes.