His first injury occurred while he was cycling home from a University of Florida research lab. A personal injury attorney hit Rifkin in the chest with his Jeep, knocking him over and parking on his hand.

While Rifkin was still recovering from that injury, he fell off his mountain bike while pedaling rapidly through a flat greenway. His clipless pedals refused to let go of one of his feet, resulting in a sheared femur that left him bedridden for three months.

In terms of mobility, Rifkin was back at square one. He progressed from being bedridden to using a wheelchair, then a cane. After years of physical therapy, he finally graduated to unassisted walking.

The implications of re-learning to walk weren’t lost on Rifkin. “From an engineering viewpoint, I was kind of appalled at the stark comparison between what my feet were doing when they operated properly and how prosthetics operated with current market technology,” he says.

“When you’re walking, things operate on a really passive basis. As long as your foot and center of gravity are in the right place, and the joints beneath your knee have the proper range of motion, you’re going to take a proper step.”

“On the other hand, a carbon fiber leaf spring is very stiff. You have to load it up significantly before it starts to move. That’s completely different from a natural movement.”

“I thought about it cumulatively for months, and I realized…this is real. There’s got to be a better mechanical way to make this happen.”

Rifkin’s copious amounts of patience and endurance have kept him in the entrepreneurial game for nearly a decade, a time span in which 71% of startups flounder.

Business Pundit interviewed Rifkin to learn the secrets behind his motivation and tenacity in the face of sizable roadblocks.

BP: What inspired you to start Tensegrity?

A lot of it was having a poorly chosen degree, honestly. My degree is in biomedical engineering. I thought that since the degree was really hard to get, few people would have it, and it would be worth a fair amount of money.

That only works if there’s an industry to hire you. In 1996, when I graduated university in Florida, there just wasn’t a medical device industry. In California, there was, but I wasn’t interested in moving there.

I rattled around research jobs for a while and made really lousy money. I kept my night job as a line cook at a restaurant and bar to try to pay rent, and was generally dissatisfied with how I’d spent my college career.

I eventually moved and got a job at a mountain bike shop for a while. That’s where I bought the bike–on employee discount–that I broke my femur with. Of course that’s what got me thinking about feet, what they’re good for and what they do.

I later worked for a series of insurance companies, where I gained a solid understanding of business politics and acumen. One insurance company had an illegally high pending claims rate. They had sold so many policies—they had really aggressive salespeople—that they couldn’t administer their own business.

Pended claims are a potential liability, and they were a publicly-held company. Every quarter, they would routinely deny millions of dollars of pended claims, with the assumption that if people were serious they would resubmit. But there was no check to see if the claim was a resubmission or not.

This was an illegal business practice, and the way they got around the potential prosecution was that they had the governor of the state, Jeb Bush, on their board of directors. They were above the law because he would not be implicated.

I thought…I can do better than that. I mean, that was a publicly held company, and it was run like that. That was an interesting formative experience in my business psychology.

And then I moved out West. I had a day job for 5 years, 4 years longer than I thought I’d have it, while I tried to get my foot design stabilized and funded. Eventually, in 2005, a grant came through. I negotiated the company down to 3/4 time, so that I had more time to work on my product.

BP: If you have a hard day or week ahead, how do you deal with it?

There are some hard aspects of the job. I’m not a big fan of patent writing, grantwriting, or payroll taxes. But there are parts of my job that I love. I love the design work and I love the helping people, so I guess my work-life balance is job-job balance.

I treat myself by doing the parts of my job that I love as often as possible. I also tie my work together into a big picture, that I’m writing this grant so that it can be funded and I can do the work that’s outlined there. The work is fun. The planning of the work and the explaining of the planning of the work to other people in grant format may not be fun, but stepping back and seeing the big picture and seeing why it’s important that I do the nasty parts on time and with good quality helps a lot.

SEE ALSO:
Businesses You Can Start With $100 or Less

My initial schedule when I was working full time was this: I’d come home from my day job at 5pm, go straight to sleep, wake up hungry, eat something really quickly, work in my shop until 4am, clean up and shut it all down, go back to sleep, wake up at 8am, go back to my corporate job and keep it all running. I had two four-hour naps between work to sustain me.

I’d get overwhelmed, but then I’d get back to the task on hand, use focus and concentration to make the precise metal cut, write this sentence precisely, write that email. After you tie it all together with the big picture, it’s easier to stay motivated about why a particular task leads to the bigger picture of success. Without that understanding, I don’t think I could do it.

BP: How did you find a mentor?

Mentors were hard to find because I had a day job. I’d go to the DaVinci Institute (a futurist think tank/entrepreneur center) and those sorts of places. As soon as I mentioned having a day job, I’d be taken less seriously. I felt like people were perceiving me as inadequate, like “Why don’t you have belief in yourself? When you going to do this for real? If you really believe you’ve got something, why don’t you commit to it?” Nobody said that out loud, but that’s what I felt was going on.

It’s easy to speak in generalizations and platitudes about entrepreneurial ventures. Like if you’re in, you’re in, and things will financially work out from there. Well, real life’s not that cut and dry. You still need to eat.

I ended up actually finding mentors in unexpected places, especially when I started grad school. I decided to attend grad school to gain access to equipment more than anything else. I ended up finding two mentors there, one in a different department, and one who ran the engineering tool crib. He was the retired COO of a cardiovascular medical device startup, meaning he was repeatedly tasked with taking product ideas from idea to startup. He was an invaluable mentor.

You always have to keep your eyes out–between my two main mentors, I’ve got a wealth of experience and perspectives, and I didn’t find either of them where you’d really expect. 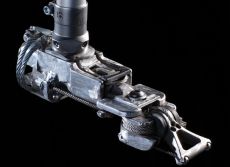 BP: What stops you from giving up?

I used to joke that I’m not smart enough to give up. I don’t know, really. It feels like the right thing to do, to pursue it. Even now, with angel rounds coming in and venture capitalist interest, I still wonder, before the grant comes in, how I’ll make my mortgage payments. It’s a real challenge sometimes, but oddly enough, I never consider giving up.

I think part of it is that I’ve been doing it so long that it becomes part of my self-definition, so I can’t give it up psychologically. Another part is that I’ve seen enough preliminary success that I have a lot of hope for the future. Giving up now would be abandoning everything I’ve done. You know how like the airline industries can’t fail because they’re big enough in the American economy? I’ve got enough riding on this one that if it fails, I will be a long time recovering.

That’s the difference between involved and committed. It’s like the old ham and eggs breakfast joke: The chicken was involved, the pig was committed. I’m not a big fan of that one, but it’s true. My ass is on that plate.

BP: What do you use for inspiration?

I use those inspiring quote refrigerator magnets and the occasional fortune cookie. My favorite fortune cookie says “You will make thousands of dollars daily by doing nothing.” I like that one, the product could well make me thousands daily while I do nothing.

BP: Where do you envision Tensegrity in its most successful form?

I was so naive, I thought I’d have the foot done within two years. Here I am, 8 years later. That is one of my inspiring visions for how to enjoy my creations.

Jerome Rifkin is the founder of Tensegrity Prosthetics. To find out more about the company, please visit their website.