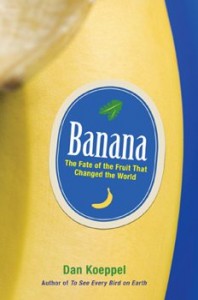 In an ongoing attempt to save money on food, I’ve begun buying large amounts of bananas. I don’t particularly like them, but they’re cheap, nutritious, and taste good in cereal, making them one of the supermarket’s best bargains.

But something about the pricing of this jungle fruit confounds me. Why are they so cheap? They only grow in equatorial environments and clearly have to be shipped quite a distance. The fruit takes months to mature. Some people say they’re going extinct.

I was wrong. Sometimes asking simple questions leads to long, elaborate answers. Bananas are like that, deceptively simple.

The first breadcrumb I found in my quest to explain the cheap banana was written for by Banana: The Fate of the Fruit that Changed the World author Dan Koeppel for the New York Times.

If you think bananas are just naturally cheap, check out this background, quoted from Koeppel’s article: 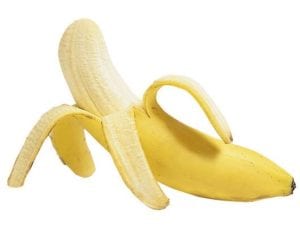 How Bananas Became a Common Snack Food
(Bananas) became a staple only after the men who in the late 19th century founded the United Fruit Company (today’s Chiquita) figured out how to get bananas to American tables quickly — by clearing rainforest in Latin America, building railroads and communication networks and inventing refrigeration techniques to control ripening.

The banana barons also marketed their product in ways that had never occurred to farmers or grocers before, by offering discount coupons, writing jingles and placing bananas in schoolbooks and on picture postcards.

Once bananas had become widely popular, the companies kept costs low by exercising iron-fisted control over the Latin American countries where the fruit was grown. Workers could not be allowed such basic rights as health care (or) decent wages. …banana companies, aided by the American military, intervened whenever there was a chance that any “banana republic” might end its cooperation. Labor is still cheap in these countries, and growers still resort to heavy-handed tactics.

Why Bananas are Historically Cheap
...banana importers sell only a single variety of their fruit, the Cavendish. There are more than 1,000 varieties of bananas — most of them in Africa and Asia — but except for an occasional exotic, the Cavendish is the only banana we see in our markets. It is the only kind that is shipped and eaten everywhere from Beijing to Berlin, Moscow to Minneapolis.

By sticking to this single variety, the banana industry ensures that all the bananas in a shipment ripen at the same rate, creating huge economies of scale.

OK, so economies of scale keep bananas cheap. But are they still as powerful when oil prices go through the roof?

Every agribusiness exploits economies of scale. But that didn’t stop milk from hitting $4/gallon. And milk is domestically produced. Bananas come from Central America. What gives?

I emailed Koeppel to find out more about the mysteriously cheap banana. I asked him why bananas aren’t super-expensive, like every other food imaginable.

We went back and forth a couple of times. The following excerpts were written by Koeppel during our email exchange:

Bananas Are More Expensive Than They Used to Be
Actually, wholesale banana prices have gone up – by more than ten times the rate of inflation over the past five years. They reached peaks earlier this year, and though they’ve since gone down, for the past five years, the trend has been up, and will continue to go up.

Bananas Are Low-Margin and Plentiful, Keeping Them Cheaper than Apples and Oranges
Bananas are cheap, compared to apples and oranges. They always will be – that’s economies of scale at work (banana sales = apples/oranges combined.)

Here’s a key point: Bananas, on some level, don’t compete with other fruit. They compete with other snacks, like candy bars and bags of chips. A lot of bananas these days are sold in convenience stores, where the markup is incredibly high. My local 7Eleven gets 75 cents for a banana. But that’s still a good deal, both price-wise and nutrition-wise compared to a Snickers bar or a “Big Grab” pack of Doritos.

Banana pricing is also a curious thing. For one, the fruit is often presented by supermarkets as a “loss leader,” so the at-the-counter price is sometimes set at very low margins.

In addition, the most threatening banana disease – Panama Disease, the one for which there is no cure – has yet to hit our hemisphere, and therefore our banana supply. That means it hasn’t yet affected our bananas, since our imports come exclusively from our hemisphere. Elsewhere in the world, that’s not the case, and prices have gone up.

Bananas Could Soon be a Luxury Item
My belief – the banana companies don’t agree, but legitimate scientific opinion does – is that Panama Disease is coming to our hemisphere. The disease is very communicable, but nobody knows when or how the infection will arrive.

A good analogy would be if a single person on another continent carried a fatal virus – and was roaming around the earth, guaranteed to come into contact at some point with you. You wouldn’t know when, but once he did, you’d be in big trouble.

That’s Panama Disease. The best estimates are probably ten to thirty years. The key point is that it is incurable and will be very fast moving once it does arrive, that will be when it pressures prices much higher.

*
Moral of the story? Bananas are cheap now, but that’s from a combination of massive scale, supermarket pricing, and luck (no Panama disease–yet). They won’t be cheap forever.

Enjoy ’em while you can.