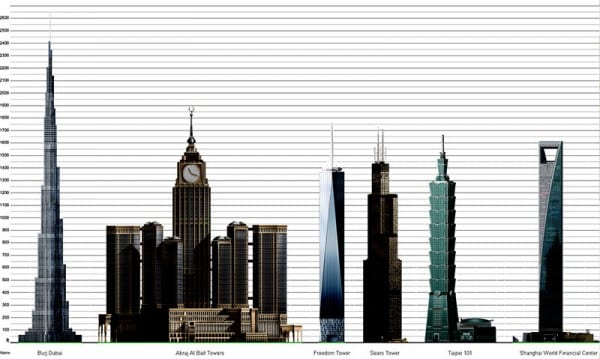 The Burj Dubai’s height relative to the world’s other tallest buildings. Source: ABDB.

At about 2,600 feet — the exact height is literally a state secret — (the 160-story Burj Dubai) displaces the 1,670-foot Taipei 101 Tower in Taiwan to become indisputably the world’s tallest building, and it should hold that title for several years.

Burj Dubai has three distinct identities. The lowest floors contain a hotel. Above that are residences, some of which get hotel-style amenities such as maid service. And above that, in the most slender portion, are offices that were sold, not rented.

The BBC puts the Burj Dubai’s completion into context:

Dubai is a city of superlatives, where everything has to be the biggest and the boldest. But like many of the world’s past tallest buildings, Burj Dubai was planned and built during the boom years, and finished during a property crash. The Empire State Building was completed during the Great Depression in the 1930s and the Petronas Towers in Malaysia during the 1990s Asian financial crisis.

This has led many to question whether this latest record breaker is a white elephant. Though Mohamed Ali Alabbar argues it is anything but.

“As of today we have sold 90% of the building and we expect it to be 90%-occupied,” he says. “We were lucky to make more than a 10% return. Originally we thought we’d be lucky to break even, because we can make so much money from the land around Burj Dubai which is a 500-acre site.”

The fact that the developer has made a profit on its $1.5bn (£928m) investment has been helped by the fact that it bought the land with equity and not cash, and that it pre-sold most of the apartments and offices before the property crash.

Investors have already handed over 80% of the value of the apartments and offices, and will pay the remaining 20% on moving in. And in contrast to many unfinished developments in Dubai, the default rate among investors has been low.

If nothing else, the Burj Dubai is the city’s last hurrah for a long time.