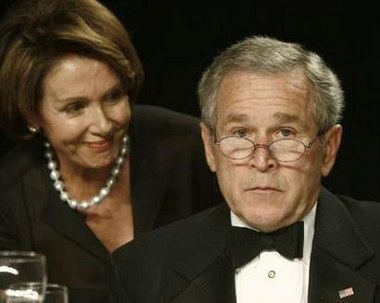 In an unprecedented move towards transparency, the government posted its 110-page financial bailout bill on the Internet. It’s written in Bill-ese, so the House posted two shorter versions in addition to the full text of the bill.

The House will vote on the bill early Monday morning; the Senate Wednesday.

A few key points not listed in the summary I quoted below:

–The golden parachutes clause is pretty subjective. Not everyone gets their chute lines cut. In fact, it looks like the richest parachuters *really* don’t get their lines cut (see the full draft to see what I mean).

–Hank Paulson is pretty much God, or at least a de facto President, until the economy gets back on its feet. The plan doesn’t include specific steps on how to implement its points. Paulson and a team chosen by him come up with those steps. The plan is just an outline.

–The money acquired from stock sold by the government in the name of the zombie corporations will be used to pay off the national debt. Am I missing something here? Shouldn’t that money be going back into programs like Hope for Homeowners, which the bill touts?

SUMMARY OF THE “EMERGENCY ECONOMIC STABILIZATION ACT OF 2008”

I. Stabilizing the Economy

The Emergency Economic Stabilization Act of 2008 (EESA) provides up to $700 billion
to the Secretary of the Treasury to buy mortgages and other assets that are clogging the
balance sheets of financial institutions and making it difficult for working families, small
businesses, and other companies to access credit, which is vital to a strong and stable
economy. EESA also establishes a program that would allow companies to insure their
troubled assets.

EESA requires the Treasury to modify troubled loans – many the result of predatory
lending practices – wherever possible to help American families keep their homes. It
also directs other federal agencies to modify loans that they own or control. Finally, it
improves the HOPE for Homeowners program by expanding eligibility and increasing
the tools available to the Department of Housing and Urban Development to help more
families keep their homes.

Taxpayers should not be expected to pay for Wall Street’s mistakes. The legislation
requires companies that sell some of their bad assets to the government to provide
warrants so that taxpayers will benefit from any future growth these companies may
experience as a result of participation in this program. The legislation also requires the
President to submit legislation that would cover any losses to taxpayers resulting from
this program from financial institutions.

IV. No Windfalls for Executives

Executives who made bad decisions should not be allowed to dump their bad assets on
the government, and then walk away with millions of dollars in bonuses. In order to
participate in this program, companies will lose certain tax benefits and, in some cases,
must limit executive pay. In addition, the bill limits “golden parachutes” and requires
that unearned bonuses be returned.

Rather than giving the Treasury all the funds at once, the legislation gives the Treasury
$250 billion immediately, then requires the President to certify that additional funds are
needed ($100 billion, then $350 billion subject to Congressional disapproval). The
Treasury must report on the use of the funds and the progress in addressing the crisis.
EESA also establishes an Oversight Board so that the Treasury cannot act in an arbitrary
manner. It also establishes a special inspector general to protect against waste, fraud and
abuse.

I think that more stringent punitive measures should be put in place for executives of the monsters that fluffed up their balance sheets with bad assets. Not just cutting the golden chute for those who retired, but actually taking some of their salaries, or putting them on trial.

And Paulson shouldn’t be given the nearly unlimited power the bill grants him. Get the legislature involved more. It takes a little longer, sure, but I’m sure they can rush votes once in a while.

One more gripe: The Hope for Homeowners program gives first-time homeowners a tax credit up to $7,500 if they bought their homes between April of this year and July of 2009. Now, wouldn’t that be a good incentive for somebody with money to buy a home and get that relatively sweet tax credit? How do they stop abuse of the bill?

What do you think about the bill?